Chris Hughton feels that his Birmingham team were ‘victims of their own downfall’ last night after they were beaten 2-1 away at Hull City.

Blues had taken the lead through birthday boy Chris Wood in the 34th minute.

But the Tigers caught them cold at the beginning of the second half and had equalised 90 seconds after the restart.

Blues were then punished for pushing for a winner when Hull counter attacked and scored the decisive goal in the 68th minute.

“We were victims of our own downfall because if I look over 90 minutes we certainly had enough good chances not to lose the game,” said Hughton.

“After going in 1-0 up at half time what you can’t afford to do is to concede as early as we did in the second half, which of course gave them a lift.

“I thought we got back into the game after that but we weren’t clinical enough with the good chances that we had and of course we didn’t defend well enough over the 90 minutes.

“The two opportunities they had were good finishes from half chances, but they were clinical and we weren’t.” 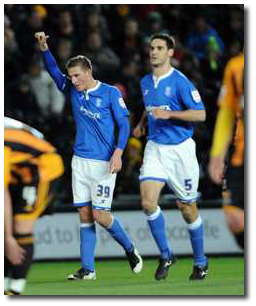 Chris Wood celebrated his 20th birthday with his 11th goal of the campaign after linking up with strike partner Marlon King.

“The link-up for the goal was very good and it was a super strike by Chris Wood who is very capable of that and that’s why he’s got the goals for us he has,” The Blues boss said.

“I thought Marlon and Chris were a threat but when they’re a threat like that you need to make sure you’re getting the maximum from it.

“The pluses were that we got into good areas and were able to create.”