Chris Burke has insisted that Birmingham City will go into tomorrow night’s Europa League game against NK Maribor with a positive attitude, even though a win may not be enough to seal a place in the final 32 of the competition.

Blues defeat to SC Braga last month means that Chris Hughton’s team need the Portuguese side to beat Club Brugge in the other game being played out tomorrow in Group H. 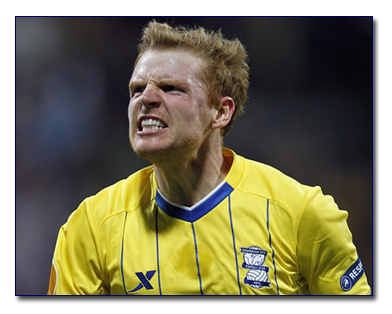 Speaking to bcfc.com, Burke, who scored against Maribor during Blues  2-1 victory over the Slovenians back in September said: “I think we just have to look at it positively.

“It will still be a tough match against Maribor but at the end of the day we have to win our game and see what happens from there.

“We have had a good run with highs and lows, which I’m sure the fans would agree with.

“We’ve had a fantastic time travelling to different places around Europe and the support of our fans has been magnificent.

“We’ve had some good results on our travels and we were all disappointed that we didn’t get anything from the game against Braga.”

Burke feels the European campaign has been a major boost for the Blues players and has thoroughly enjoyed it.

“The Europa League has been a great experience because you want to play against the best players in the world,” he said.

“I think people thought it was going to be a bit tough for us and something that wasn’t needed.

“But in a sense I think it maybe spurred us on and given us confidence in what we can do on the park.

“I think some of our performances in Europe this season have been different class, the way we’ve passed the ball about against teams that are experienced in Europe has shown how good we are.

“We want it to carry on and get through this group stage. I believe if we qualify then we can go far in this competition.

“We’ve shown that we can handle ourselves against top quality opposition and if we beat Maribor and get a wee bit of luck then who knows what can happen?”