No Joy with Formation Change

Birmingham City adopted a  4-5-1 formation at Selhurst Park last night, but Chris Hughton’s team  were beaten by a Kagisho Dikgacoi header in the 84th minute.

The Blues boss switched tactics in the hope of upsetting a Palace side that has only conceded six goals at home this season. 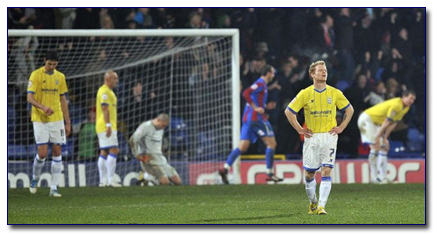 With Marlon King being supported by wingers Chris Burke and Nathan Redmond, Blues had the majority of the play in the first half.

However, the Eagles began to take control after the break and eventually found a way through Birmingham’s defence.

Hughton said: “Of course what you’re always after is improvement and we’re also on the back of four away games on the spin in a short period of time and sometimes you are looking for a bit of a different formula to change things, away from home.

“We were conscious that we were coming to a team, a place, where it’s difficult to get a result. So you are looking perhaps to change things.

“I thought for large periods of the game it worked. I felt it was a game we weren’t going to lose.

“We certainly opened them up for opportunities, which unfortunately we didn’t take.”

The Blues boss sent on Nikola Zigic, Wade Elliott and Chris Wood in the second half, only to see Crystal Palace grab a late winner.

“These are the decisions that are made in games and sometimes it’s not down to decisions but moments. Moments that define a game and they had the one moment that counted.” Hughton continued.

“Over the course of the game [we] deserved to get more out of it.

“But if you’re not putting the ball in the back of the net there’s always the chance the opposition will. If you don’t score, then you’re applying more pressure on yourself.

“You need to defend well enough for the 90 minutes, the moment they scored we didn’t defend that opportunity well enough.”