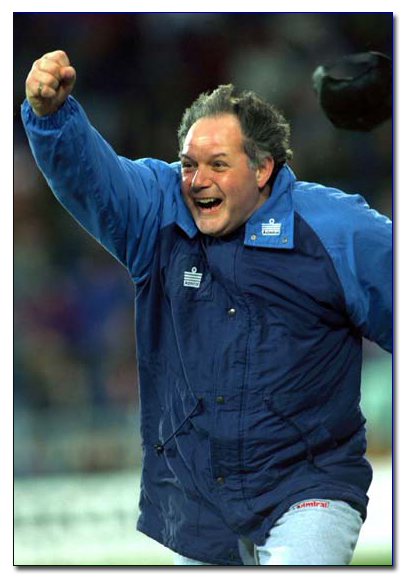 Despite a miraculous last gasp run-in the previous season that saw Barry Fry’s Birmingham City go unbeaten for the final seven games (winning five) of the campaign, Blues fell through the trapdoor to the old Third Division (re-branded Division 2) following a 2-1 away victory to Tranmere Rovers on the last day of the season.

Barry Fry was carried shoulder high by the Blues fans that had made the trip to the Wirral and was allowed to rebuild his squad for the 1994/95 campaign by the Birmingham City board.

Blues were considered the ‘big boys’ that year in Division 2 and Barry Fry had a large squad which boasted experienced top division campaigners such as Chris Whyte, George Parris and Mark Ward. They where joined by established Birmingham City stars like Ian Bennett, Paul Tait and Louie Donawa and the promising Jonathon Hunt, Jose Dominguez and Steve Claridge – amongst many others.  Competition for a place in the starting line-up was fierce.

Birmingham City were well placed as they welcomed Sam Allardyce’s Blackpool to St Andrew’s. They had won 10 of their previous 12 matches and knew that a victory today could see them sit proud at the top of Division 2 as everyone celebrated the beginning of 1995.

Barry Fry had made three changes from the side that had won 1-0 at Cardiff City three days earlier with Liam Daish replacing David Howell at centre back, Louie Donowa filling in for Neil Doherty on the wing and a surprise call up for Kenny Lowe, who had not featured since Birmingham’s opening day defeat away to Leyton Orient.

Blackpool took to the field unchanged from their previous run out and this clash between two attack minded teams had the 18,000 fans inside St Andrew’s relishing a festive cracker. They were not to be disappointed.

Blues started brightly and put Blackpool under some early pressure before the visitors hit Fry’s men on the counter attack and drew first blood in the eighth minute when Darren Bradshaw took advantage of a rare defensive mistake to shoot past a stranded Ian Bennett from close range.

This seemed to galvanise Birmingham who roared back and were on level terms within four minutes when hero turned villain, Bradshaw deflected a tame cross past his own keeper. This was the second consecutive game at St Andrew’s where a player had managed to score for both sides, matching Ricky Otto’s efforts against Cambridge United on Boxing day.

The game became an entertaining and frantic encounter with end to end action, before Blues squeezed ahead after twenty-five minutes. Louie Donowa beat Blackpool’s full back on the wing to race clear and smash a rising shot from just inside the penalty area into the roof of the opponents net. 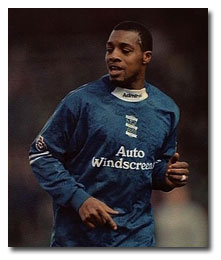 With Barry Fry’s team taking control of the game, they lay siege to the Seasiders goal and it was no surprise when a superb 30 yard shot from Steve Claridge put Blues 3-1 ahead in the thirty-seventh minute.

Despite constant pressure from Blues, Sam Allardyce’s men managed to keep the score at 3-1 as they went into the half time interval. The Birmingham players left the pitch to a fantastic ovation from the St Andrew’s faithful.

Blues continued where they had left off after the break and peppered the Blackpool goal in their desire to increase the lead.  And, it was just eight minutes from the restart when a Ricky Otto far post cross was cleverly headed back across the goal by Kenny Lowe and the ball was allowed to drop over the line at the opposite corner of the net.

Blues were now most definitely in the ascendency and were running riot, on sixty four minutes a cheeky back heel from Kenny Lowe rolled perfectly into the path of Louie Donowa who made no mistake with a simple tap in to make it five.

The game now turned into a semi-exhibition match with Blues stroking the ball around and treating the crowd with cute flick-ons and back heels. One such back heel from substitute, Steve McGavin found the ever alert Claridge who deftly chipped the ball over Mel Capleton in goal, who had dived at the strikers feet.

The rout was completed four minutes from time when George Parris poked the ball over the line from close range after a penalty box melee.

The win placed Blues at the top of Division 2 for the first time that season and would ultimately see Barry Fry’s team gain promotion back to Division 1 at the end of the season.

Now, I am not expecting a 7-1 thrashing of Blackpool at St Andrew’s on New Years Eve for one minute. But, after the year Birmingham City FC have just had, I wouldn’t rule it out. KRO!