Birmingham City are hoping that Boaz Myhill will recover from his illness in time to face Millwall tomorrow afternoon at the New Den.

The Blues goalkeeper was substituted at half-time during Wednesday evening’s 2-1 victory over Ipswich Town due to sickness. 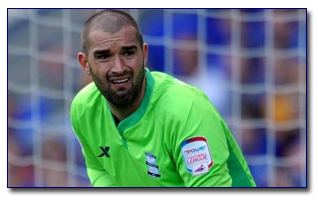 If Myhill doesn’t recover, Colin Doyle will again deputise for the Welsh international between the sticks.

Other than that, Chris Hughton is expected to have the same players that he used in midweek at his disposal.

Pablo Ibanez will have his knee assessed but is likely to miss out, while captain Stephen Carr remains a week or so away from a return.

Attempts to extend Chris Wood’s loan from West Bromwich Albion have fallen through with the New Zealander joining Bristol City for the rest of the season.