Birmingham City manager Chris Hughton has warned against his in-form team taking their foot off the pedal and expects the season to still hold a lot more twists and turns. 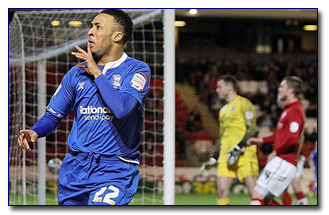 Blues easily beat Barnsley 3-1 last night at Oakwell and are now handily placed at third in the npower Championship with fifteen games to go.

Chris Hughton told the Birmingham Post: “I think we always have to kick ourselves and remind ourselves there is still a third of the season to go. I’m quite sure in that 15 games there are going to be lots of twists and turns.

“We’re in good momentum but it’s not only us. Blackpool lost tonight but there is a good group of teams who are all showing good momentum.

“The important thing for us is that we can’t take our foot off the pedal.

“We’ve also got two teams above us who at this moment don’t look like losing a game.

“I certainly think that any team that finishes above West Ham and Southampton will go up automatically.”

Hughton felt Birmingham City were well worth their win last night and was pleased with his team’s defensive qualities.

“I think it’s an important win for us, I thought we deserved the win over the 90 minutes but we had to defend very well at times,” he added.

“I think that was the basis that allowed us to take our chances and go on and win the game.”