Getting Better All The Time

It’s getting better all the time for Birmingham City according to striker Jake Jervis who believes he is an improved footballer thanks to his recent spells out on loan. 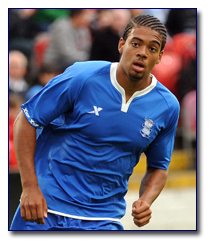 The 20-year-old Wolverhampton born forward has spent time at both Swindon Town and Preston North End this season and feels the experience has done him the world of good.

Since returning to St Andrew’s, Jervis has featured on the bench for Birmingham and enjoyed some playing time against Chelsea in the FA Cup.

However, the arrival of Erik Huseklepp from Portsmouth has seen the youngster slip down the pecking order.

But undeterred, Jervis is determined to show Chris Hughton just how much he has improved by working hard in training each day.

Speaking to the Birmingham Mail, he said: “All I can do is remain patient and keep working hard in training.

“I have been involved in the first team and I still want to be in and around it.

“Coming back from my loans, it was with the intention of being as sharp as I could be.

“It was about getting regular football and more experience.

“I enjoyed the moves and, without a doubt, I’m a better player for them.

“Compared to last season, I’m definitely ready to go into the team if the manager wants me to.

“I’m more mature as a player, I’ve had to be more like a man physically in using my body and stuff, putting myself about against defenders.

“The loans have helped me improve that side of it and I think, generally, I have improved all round as striker.”

Jervis’s loan at Swindon Town lasted three months in which he scored five times in fourteen games. He was then loaned out to Preston where the youngster scored two goals in as many appearances. His stay at Deepdale was cut short due to a change in manager.

“At Swindon we were winning, we went unbeaten in about 16 or 17 games, there was a good feeling around the place and we got the ball down and played.

“It was good to be a part of it and there I got better at the defensive side of things, knowing when to close down and when not to, and also got a few goals.

“The big thing for Paolo di Canio was that he wanted me in the box, in the six-yard box, attacking the ball and making runs to get into areas to score.”

Jervis got nineteen minutes of action against Chelsea in the FA Cup fifth round tie earlier this month and played the ball through for Nathan Redmond’s chance late in the game.

“It was a great opportunity to get on the pitch, it felt good, and it gave me another taste of what I want more of,” Jervis said.

“I didn’t feel fazed or anything, I just tried to do a job for the team, work hard and cause their defenders some problems.”