Chris Hughton has spoken of the pride he has for his group of players following Birmingham City’s exit from the FA Cup at the hands of Chelsea last night. 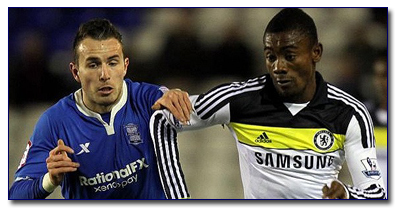 The Blues manager has admitted that he knew his team would be ‘up against it’, particularly as the number of players unavailable for the clash began to mount up due to injury and eligibility.

Speaking to bcfc.com, Hughton said: “When you consider the amount of games that we’ve had and the quality that we were up against, we’ve got a lot to be proud of tonight.

“Chelsea were always going to have more possession than us with the quality that they’ve got.

“We knew it was going to be a tough ask and we went into the game with some injury problems.

“David Murphy’s absence was a big blow along with Stephen Carr and Stevie Caldwell plus our three loan players were ineligible.

“It was a little bit different for Chelsea. They can leave the players that they did out of the team and still field a real quality 11.

“Irrespective of beating a Championship team, they could have beaten a Premier League team with the quality that they’ve got tonight.”

Blues looked the strongest team during the opening 45 minutes, but were unable to make the breakthrough required.

Hughton continued “We needed to stay in the game longer in the second half and get to the stage where they became a little bit anxious.

“We finished strongly and we had the opportunity from Jordon Mutch and if that had been at 1-0 then you’re right back in the game.

“Of course the first goal and then the second from Chelsea made things really difficult for us and we were chasing the game but I couldn’t fault the effort that my players put in.

“I’m proud of what this group of players have done in the cups this season but now it’s time to concentrate on getting our league form back on track.”

Birmingham make the short journey to the Ricoh Arena this weekend where they will be concentrating on consolidating a place in the play off positions with a much needed win.

“We’ve got 13 games to go, starting with a tough away match at Coventry but at least this allows us to focus,” Hughton concluded.

“We’ve enjoyed the cup campaign and we’re grateful to the support that have travelled for all the games that we’ve played.

“There is no shame in losing to a Champions League team tonight.”

One Response to Birmingham City Pride