Old Boy Back to Face Boro

Birmingham City manager Chris Hughton is hopeful that David Murphy will be fit in time to face the football club where he began his career. 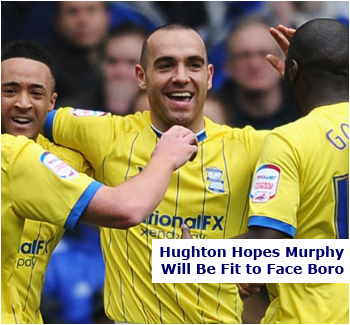 The 28-year-old full back has been sidelined for the last four games with a hip injury but is expected to face Middlesbrough at St Andrew’s on Saturday.

Murphy’s return would be very timely following the injury that Jonathon Spector picked up on Tuesday night at Leicester City’s King Power Stadium.

“Jonathan Spector is out which is a big blow for us.

“He’s been almost an ever present all season and played in a few positions for us because he’s such a versatile player.

“He’s got a slight thigh strain which will keep him out for a few weeks.”

Hughton expects to welcome back Nathan Redmond who missed the defeat to Leicester City with a slight knee injury.

Club captain Stephen Carr (knee) is still sidelined and Caleb Folan has received a set back in his quest to gain full fitness after hurting his ankle playing for the reserves.

“Nathan had a little reaction to training a few days ago which ruled him out,” added Hughton.

“He trained today and if there’s no reaction he’ll be fine.

“Carr is still out.

“Caleb played in a game at the training ground in midweek and got a whack on his ankle which has just set him back a few days.”