Birmingham City to Build on Win

Birmingham City travel to Portmouth’s Fratton Park tonight looking to build on their 3-0 win against Middlesbrough on Saturday. 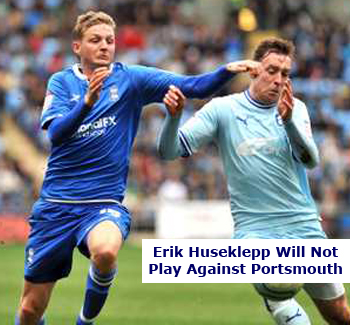 Portsmouth are languishing at the foot of the npower Championship table on 27 points, eight points shy of safety.

As Blues were making light work of Boro at the weekend, Michael Appleton’s Pompey saw out a 0-0 at home to Bristol City.

Chris Hughton will be without the services of Erik Huseklepp who is prevented from playing against his parent club.

Caleb Folan could make his first appearance for Birmingham after travelling down to the south coast.

Peter Ramage should feature after recovering from tonsillitis which saw him out of sorts on Saturday and Jordon Mutch serves the final match of his three game ban.

“It’s tough for Portsmouth. I think everyone in the game feels for them,” Chris Hughton told bcfc.com.

“They are able to put out a good 11 but of course it is getting tougher for them.

“Of course with the players they have lost it very much affects the squad.

“That 11 has changed, having lost Mullins, Lawrence and Erik (Huseklepp) the week before, they were players in the team.

“But you know what you are going to get from them is a good spirit.

“On most occasions when a team is going through a tough period through no fault of their own, the players rally and the team talks are not so difficult for the manager.

“It is all about a team staying together and working hard as a team and giving everything for the team.

“I don’t think he’ll have any problems motivating the team, but of course when you’re having to make changes it gets more difficult for you.”