Pompey Play Up at Birmingham’s Expense

Ten man Birmingham City suffered a heavy defeat at the hands of Portsmouth last night in a game that began so well for Chris Hughton’s team. 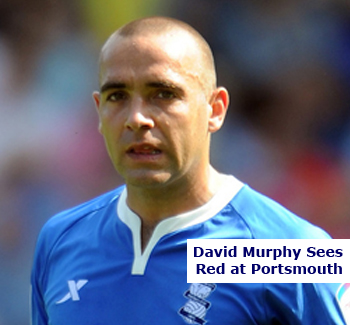 Nikola Zigic grabbed an early goal for Birmingham and Blues seemed to be in complete control during the games opening stages.

But Birmingham failed to capitalise during this period and ultimately counted the cost during the second half.

Chris Maguire hauled Pompey level in the 54th minute, then David Murphy was sent off for a second bookable offence five minutes later. The resultant freekick put Portsmouth ahead and Blues were helpless as Pompey grabbed two more goals to run out 4-1 winners.