Birmingham City consolidated their place in the Championship play-offs with a 3-1 home win over Crystal Palace’s Eagles. 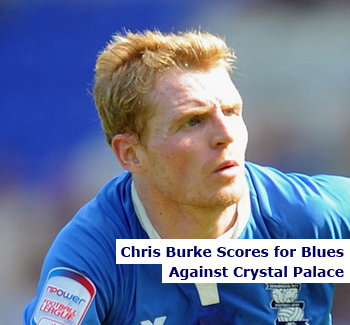 Blues have notched up the same scoreline in three consecutive matches betraying the 55 games that Chris Hughton’s team have played so far this season.

Chris Burke put Birmingham ahead in the 21st minute. Keith Fahey added a second one minute later before David Murphy made it three just after the half hour.

Owen Garvan pulled one back for Crystal Palace in the 45th minute, but the damage had already been done.

Birmingham City dug deep in the second half and snuffed out any hope that Palace had of getting back into the game.

Speaking to bcfc.com Chris Hughton said: “It was always going to be tough because these (Palace) have got some good offensive options and even at 3-0 I was aware that they went to Derby a couple of weeks ago and came back from 3-0 down to 3-2 and could have got something out of the game.

“I was disappointed with the goal that we conceded because it was unnecessary and gave them a lift just before half-time. But I certainly think over the 90 minutes that we thoroughly deserved it but we had to show both sides of our game.”