Birmingham City Denied at the Death

A late penalty converted by West Ham United’s Vaz Te denied Birmingham City a victory that looked nailed on at half time. 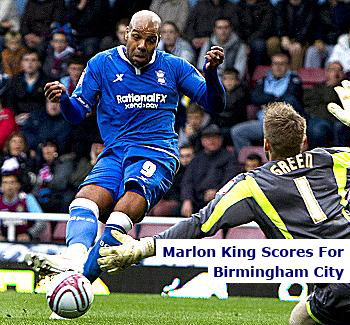 Goals from Jordon Mutch, Marlon King and Chris Burke had put Blues 3-1 up after 45 minutes, but the Hammers staged an impressive comeback to snatch an equaliser at the very end of the game.

Birmingham City slowly but surely took control of the first half after a bright start by West Ham and nearly went ahead through Chris Burke, who’s shot was tipped away by Rob Green.

Jordon Mutch then tried his luck from the edge of the box in the 22nd minute but Green was able to shepherd the ball out for a goal kick.

This didn’t deter the 20-year-old youngster who scored five minutes later after strolling through the West Ham midfield to send his shot into the bottom corner of the goal leaving Green stranded.

Blues had the bit between their teeth and increased their lead three minutes later when King was put through by Wade Elliott to finish coolly against West Ham’s isolated keeper.

The scoring wasn’t over yet as two goals in stoppage time saw the first half end with plenty of drama.

West Ham pulled a goal back when Kevin Nolan’s corner was knocked past Boaz Myhill by the head of Vaz Te.

But Blues soon re-established their two goal lead when Chris Burke squirmed his shot through a wall of players from a Jordon Mutch set piece.

The second half saw West Ham turn the screw and Blues had to survive three penalty claims before the Hammers eventually got their breakthrough thanks to Carlton Cole.

When a penalty was finally awarded to West Ham it was extremely hard on Chris Burke who could do little to avoid Lansbury’s shot from striking his hands. Vaz Te made no mistake from the penalty spot to earn West Ham a share of the spoils.

One Response to Birmingham City Denied at the Death