Birmingham City fought back from a two goal deficit to salvage a point against Bristol City at St Andrew’s yesterday. 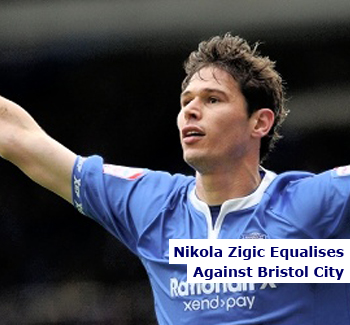 Marlon King and Nikola Zigic scored one goal each to cancel out strikes from Stephen Pearson and Jon Stead for the Robins.

The point edges Birmingham a little closer to the play-off finishing line and extended their unbeaten run to six matches.

Birmingham found themselves two goals adrift of Bristol City after 33 minutes despite dominating the game from the off set.

But Chris Hughton’s team persevered and Marlon King began the fight back just before half time.

Chris Burke then set up the equaliser for Nikola Zigic in the 61st minute as Blues continued to dominate the game.

However, Dereck McInnes’s Robins showed great resilience and managed to limit Blues’ opportunities to head back down the M5 with a share of the spoils.

Speaking to bcfc.com Chris Hughton said:”Overall I think it’s a fair result. They got the two goals in that first period and the pivotal moment for us was getting Marlon’s goal just before half-time which gave us a lift.

“We experienced a couple of problems – losing Boaz just before the kick-off and having to take Keith off, who was finding the going a little bit tough. But the second-half performance put us right back in the game.

“Probably if someone was going to go on (and win), it was us. But you’ve got to give Bristol a lot of credit. They came with a game-plan and did it very well. They would also be delighted with a point.

“Bristol scored two well-worked goals but I think as a team we could have applied a little bit more pressure on their play. We probably afforded them too much possession in a period and, when that happens, you hope they’re not going to punish you but they did.”