Play Off Place for Birmingham City

Birmingham City secured a place in the Championship play-offs following a hard fought 1-1 draw against Brighton and Hove Albion. 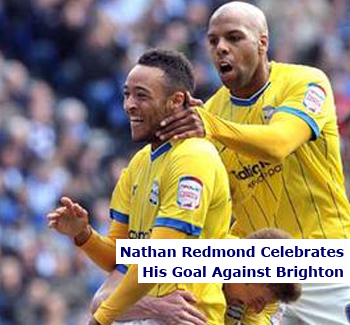 Chris Hughton’s Birmingham side edged ahead of Gus Poyet’s Brighton in the 69th minute when Nathan Redmond finished concisely from 20 yards.

But Brighton pushed for an eqaliser and eventually drew level with seven minutes left to play through Ashley Barnes.

Looking back on the season Chris Hughton told the Sunday Mercury: “I am delighted for this group of players.

“They have worked very hard all season. Me, I have had great support from the chairman [Peter Pannu] and the owner at this club and I am happy for them – they deserve it,

“It was a tough summer and it has been a tough season, with the amount of games we’ve had to play.”

Reflecting on the draw against Brighton, Hughton added: “It was actually a little bit of a disappointed changing room afterwards. I think the players felt we could have held on and the goal we conceded was perhaps a soft goal, but if you had said about a draw before the game, then we would have been delighted with that.”

The Birmingham City manager praised Nathan Redmond for his contribution and goal and admitted that he withdrew Mario Gomis from the game, fearing he may be sent off.

“I would have preferred to have kept him on. The fact that he had been booked and had another foul after that, you knew that the next foul would be a sending-off,” he said.

“That’s the last thing we could have afforded so it was through necessity, really. At that stage, I just felt that Nathan would give us a little bit on the ball and then, of course, we decided to move him infield.”

Birmingham City now face newly crowned Champions Reading at St Andrew’s next Saturday before their play-off opponents can be determined.