Birmingham City manager Chris Hughton is hopeful that Guirane N’Daw will be back in time for Blues’ Championship home clash with newly crowned Champions Reading this weekend. 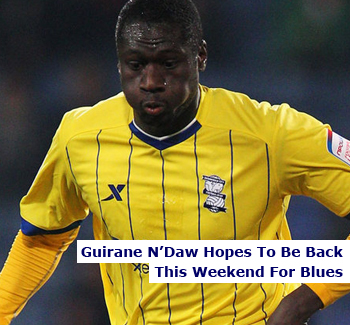 The tough tackling midfielder has been injured since Birmingham City’s 3-3 draw against West Ham United on Easter Monday.

Chris Hughton has been short of midfielders so N’Daw’s return comes as a timely boost as Blues look forward towards the Championship play-offs.

Birmingham City will still be without the services of Stephen Carr (knee), Keith Fahey (groin) and Jonathan Spector (thigh) on Saturday, but they stand a chance of being availbale for the semi-final play-off games.

“N’Daw is close and I will have to make a decision on him, but it’s encouraging” Hughton told bcfc.com. “He has missed some training but he trained today. [Stephen] Caldwell will miss any games we play in and the likelihood is that it will be the same for [Boaz] Myhill, even though that’s not 100 per cent.

“Outside of those three I mentioned are Spector, Fahey and Carr and we’re just continually working with them hoping that if we were to make the play-offs, of which we’re almost there, they will be available. Whether that would be for a first leg or a second leg it’s going to be tight because they’re not training with the group.

“The only setback with Spector is that it’s taken longer than we thought (to heal) and his progress levelled off a little bit. He hasn’t trained at the moment but he’s done some good running. After the weekend it will tell. If he’s able to do some training early next week then he’ll give himself a chance. The same with Keith and Carr, but of course Carr has been out a long time now.”

Birmingham City are guaranteed a finishing place in the play-off positions – barring a spectacular final day set of results and when asked whether he would be resting any players, Hughton replied: “Not really, any decisions I make it will be just on the team to play on Saturday. I wouldn’t make changes because I wanted to finish in a certain position.

“I think it will be very much on the day if we’ve got a couple of knocks that I need to protect. We genuinely want to finish as high as possible but we’ll accept wherever we finish because that’s what we have to deal with.”