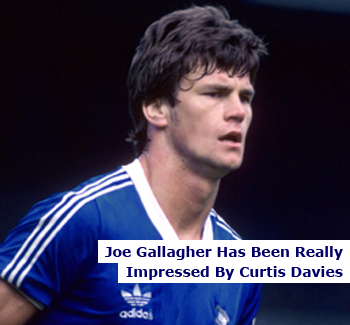 Joe Gallagher, who made 335 first team appearances for Birmingham City between 1972 and 1981 has compared Davies to ex-Birmingham and England central defender Colin Todd.

The praise is testament to Davies’ season in which he has been named in the PFA Championship team for 2011/12 and will lead Blues as captain into the end of season play-offs.

Gallagher has seen the all action central defender many times this season and is convinced he has the attributes to become a ‘top-class centre-back’. 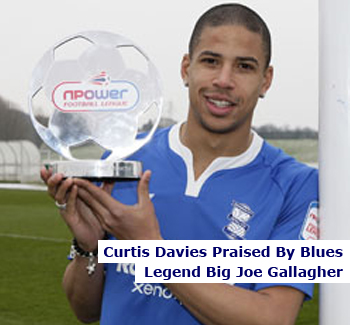 The ex-Blues captain went on to say that Davies reminded him of Todd, the classy ex-England defender who formed an impressive partnership with ‘Big Joe’ in the late 70’s and early 80’s.

“When Birmingham went in for Curtis, I thought ‘yes, that’s just the sort of signing we need,” Gallagher told the Birmingham Mail.

“Although I had not watched him that closely over the years, I knew he was a good defender, he has played at the top level and has good experience.

“Now, having seen him close up many, many times, he has really, really impressed me. Curtis has everything – and a little bit more.

“I was always told that if you’ve got good feet as a player you’re more than tidy, and Curtis certainly is.

“Colin Todd was a tidy player, very classy, and Curtis comes into that category.

“Colin was very, very calm, he had plenty of quality and was very quick.

“Those are all the attributes of a top-class centre-back – and Curtis has got them.”

With Stephen Carr and Stephen Caldwell being injured, the captains’ armband has been handed to Davies as Birmingham lead up to the Championship play-offs.

Curtis joined Birmingham City in a £3 million transfer from Aston Villa and following the departure of Roger Johnson and Scott Dann has become an integral part of Chris Hughton’s promotion chasing team.

Despite predictable speculation over his future, Davies has stated his satisfaction at being at St Andrew’s and is enjoying his involvement with the first team despite Birmingham’s Championship status.

As Johnson and Dann proved, the grass is not always greener on the other side.

“I know he had a few injuries, and only Curtis knows to what extent they harmed him, and why he wasn’t always played at Villa after his move from Albion,” continued Gallagher.

“He was on the verge of England at one time and I’m sure he will get higher recognition again as he has got all the qualities of a Premier League centre-back.

“At Birmingham playing regular games this season, with a constant partner alongside him, it has helped him tremendously.

“You build up an understanding, you gain more confidence and when it’s a familiar back four – as it has tended to be for most of the season at Birmingham – it’s not just the individual, but everyone benefits, the whole team.

“Yes, I know it’s the Championship, but Curtis has proven his worth and you can only play against the opponents you are up against.

“Curtis is what every manager wants and I’m sure Chris Hughton must be delighted with what he has done for Birmingham this season.”