As Birmingham City prepare for the Championship play-off semi-finals, manager Chris Hughton will be relieved to see the treatment room at St Andrew’s slowly begin to empty. 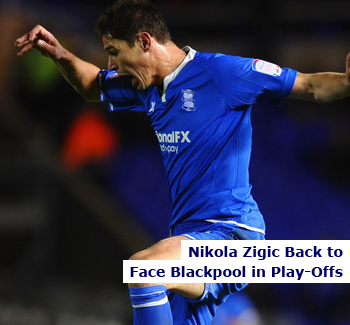 Guirane N’Daw came through Saturday’s match against Reading unscathed and Nikola Zigic has recovered from the knee injury that saw him limp off in the same game.

Hughton has also been boosted by the news that Jonathon Spector will be available to travel to Blackpool’s Bloomfield Road and that Keith Fahey and Stephen Carr are close to making comebacks.

“Jonathan Spector is going to train tomorrow (Wednesday). He’s been out a long time so we’ll make a decision on what we see over the next couple of days as to whether there’s any chance of him having any involvement. Keith Fahey is similar, but Keith is probably a little bit further away as is Stephen Carr.”

The Birmingham City manager has said that he has a fair idea of what his starting eleven will be against Blackpool on Friday, but still has one or two positions to finalise.

“I’ve got a fair idea (about my team) and I’m quite close to it,” Hughton said. “The players are off today, but we’ll train tomorrow and I’ll look at a few things then.”

On the subject of in-form Nathan Redmond, Hughton admits that the 18-year-old has given him food for thought.

“We’ve always been aware of what Nathan can do on the football pitch. Whether that’s starting or making an impact from the bench, he gives us an option. Anybody that is in good form and on the back of a good performance always gives you food for thought.”