Despite the perilous financial situation at Birmingham City FC, manager Chris Hughton does not believe his team are under any extra pressure to see off Blackpool tomorrow evening at St Andrew’s. 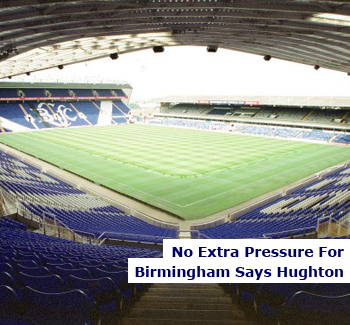 By beating Ian Holloway’s Tangerines, Blues would be taking one step closer to the Premier League and the riches that that would reap.

Birmingham City’s financial woes have been well documented this season and although Hughton can clearly see the benefits of promotion, he feels the pressure is the same as in any other game.

“It’s not rocket science that there are financial benefits for any club that goes up to the Premier League,” Hughton told the Birmingham Mail.

“That’s the case for us but also the case for a host of teams in this division who were ex-Premier League teams who have now found themselves in the Championship.

“The only pressure I feel is the normal pressures of going into a game, of winning a game, and being so close.

“If you are able to get to the final, the pressure is to win that final.

“I don’t feel any financial burden or pressures like that.

“I just feel a pressure to win football matches because we have got a team of professionals – I am a professional myself – and you want to achieve, do the best job you can.”