Chris Hughton has thanked the Birmingham City fans for their wonderful support this season and has admitted it has helped carry his team throughout Blues’ epic campaign. 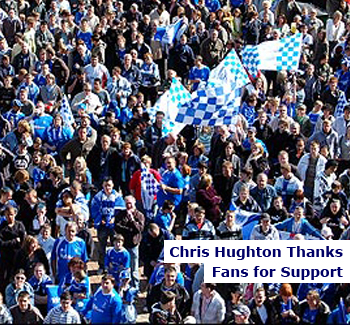 Speaking to bcfc.com, Hughton voiced his appreciation for the supporters’ fantastic backing and admitted he’s loved every minute of working at Birmingham City FC.

“Come the next couple of days when the players have had an opportunity to reflect and spend some time with their families they’ll very much remember the night,” said the Birmingham manager.

“I can imagine people in European countries looking at the game as a second tier play-off and seeing the atmosphere and thinking it’s something to be involved in.

“In these tough economic times it’s very difficult to get a packed stadium. That’s not only here, that’s anywhere.

“They’ve also had more games than any other support to have to pay out for.

“They’ve been wonderful for us all season and the players are so pleased with that support and it has carried us a long way.

“The supporters have also been fantastic to me and I’ve also been very appreciative of that. I’ve loved every minute of working at this football club.”