In the light of predictable speculation surrounding Chris Hughton’s future at St Andrew’s, two of Birmingham City’s big hitters have told of the manager’s calm and reasoned qualities that have gelled together a squad that performed well above expectations last season. 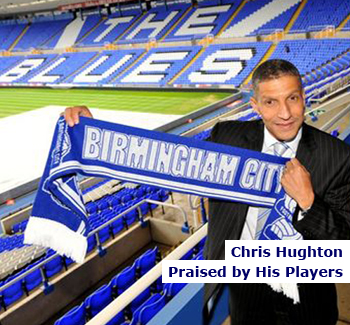 Marlon King and Curtis Davies have aired their views publically as the media continues to link Hughton with the vacant manager’s position at West Bromwich Albion despite no approach being made by Birmingham’s near neighbours.

“Of course we all want him to stay, 100 per cent,” 18-goal top-scorer Marlon King told the Birmingham Mail.

“His man management is brilliant. He works on your game, he is very hands on. He will pull you to the side and tell you what you need to work on. He gives you that quiet confidence. He is not a big shouter but he brings that calmness.

“He believes in doing your job on the pitch.

“He has done that throughout his managerial and coaching career – he did at Tottenham for a long time before Newcastle.

“I’m sure whether it’s here or anywhere else he goes he will continue to do that.”

Hughton managed to galvanise his squad throughout Birmingham City’s epic season that saw the St Andrew’s outfit play 62 matches in all.

In agreement with King, stand-in captain and Mr Consistent, Curtis Davies added: “He has been massive for us.

“He’s the one – talking about the togetherness – he’s the one who brings that.

“If you talk to a lad here who hasn’t played that many games and hasn’t been in the squad, he’d tell you the same.

“He is able to get everyone together and all pulling in the same direction.

“I think that’s a brilliant quality to have as a manager.

“If you are able to get the unhappy ones happy and on your side, you must be doing something right.”

“He is a brilliant manager, a brilliant man manager and I’m as gutted for him as much as we are for ourselves and the fans that we weren’t able to get promotion.”