Jack Butland has given Birmingham City a little respite from the gathering gloom as he sets his sights on the Blues’ number one goalkeeper shirt for next season. 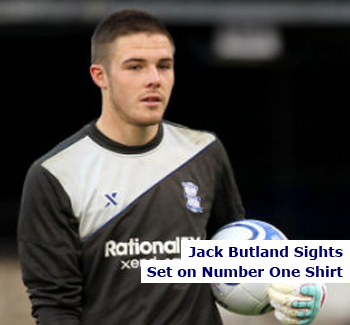 As financial uncertainty engulfs the club and rumours persist over the future of Chris Hughton, the England U-21 shot stopper has expressed his determination to make the goalkeeping starting position his own.

Butland spent two successful spells on loan at Cheltenham Town last season and was called up as cover for the European Championships by Roy Hodgson.

Speaking to the Birmingham Mail he said:”That’s the target: I want to be the number one, I want to be playing.

“Hopefully this season I have done enough and shown enough and what have you to convince the manager.

“Yes, it is ultimately down to me, I know that. I am confident in my ability.

“I can make the decision as hard or as easy as possible, depending on how I play, for Chris Hughton.

“I hope I have a good pre-season, get in the best possible shape, and make it impossible for him not to pick me.

“I’m gearing everything towards next season and trying to prove to the manager that I deserve to be number one.”

The goalkeeping situation at Birmingham City is a little confused at the moment with question marks hanging over Ben Foster, Boaz Myhill and Colin Doyle.

Butland has been linked with moves to some of the Premier Leagues biggest clubs, but his focus remains on the Birmingham first team.

“Birmingham’s a fantastic club,” he said. “Behind the scenes, with the coaches and the staff and with this manager’s team, we have got a great set-up.

“I’ve been at Birmingham for five years now and I see it as home, even though I’ve yet to make a first team appearance – which is something I want to change.

“And considering I haven’t played yet, the supporters have been great to me. I’d love to repay their faith too.”

Another admirer of Butland’s is Joe Hart who has tipped off Manchester City to the keeper’s potential.

But the admiring glances hold little water with the youngster.

“It’s a good feeling, it’s a compliment. But at the same time it’s not something to get carried away with.

“I want to do things the right way. I see it as a mark of how I have progressed, but not necessarily a big thing.

“I want to carry on doing what I am doing, I want to be the goalkeeper at Birmingham and play as well as I can play.

“I can’t control what’s outside of my domain or what’s speculated. Let them talk as it doesn’t make any difference to me, my focus is on giving my best to Birmingham and becoming number one.”