Big Bid BUT Not Enough

Birmingham City FC have turned down a £6 million bid from Southampton for promising goalkeeper Jack Butland. 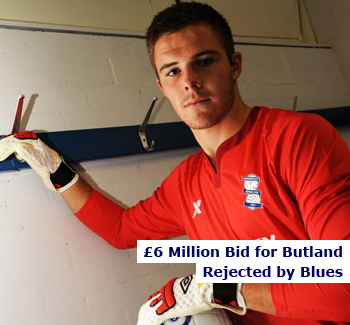 The news of the bid from the Premier League club and its subsequent rejection may allay fears of a quick cash-in for the time being, but Blues are likely to be tested by increased offers before the season gets underway in August.

With many admirers showing an interest in the young shot-stopper, Peter Pannu has stressed that the club’s most promising talent were not for sale unless Birmingham City received an ‘eye popping’ offer.

Birmingham City’s new manager Lee Clark has also expressed his admiration for Butland and it is thought the number one jersey has been earmarked for the youngster.

Speaking to the press yesterday, Clark said: “I know Jack very well because I had a young player on loan at Cheltenham last season and I went to watch them on numerous occasions.

“I know what his capabilities are and Jack has got a big part to play in the future of this football club.”

With Ben Foster seemingly heading to West Bromwich Albion, the way looks clear for Butland to challenge Colin Doyle for a place in the starting eleven.

Clark also reiterated that Jack Butland at 19, and Nathan Redmond aged 18, were star assets at the football club.

“Jack and Nathan are two fantastic young players that Peter Pannu has already come out about, in his words, and said ‘eye-popping’ bids and what he means by that is crazy bids, so it would have to be a fantastic amount of money.

“The people that get involved with that would deal with it, but it would take big, big numbers – huge numbers.

“So those lads will be part of the group that start the season because they are fantastic young players. Curtis Davies falls into that category as well as an outstanding player and very experienced player.”

Butland will be feature in the London Olympics as Team GB’s goalkeeper and Clark said he was delighted about that.

“Jack can push Joe Hart all the way to be the number one for his country,” said Clark.

“The Olympics,  it’s great kudos for the club, it’s great for the lad to have that opportunity to compete in such a fantastic arena. You can never stop that  for a young player.

“We are all delighted and proud for Jack. Hopefully he has a successful time and then comes back to us because he will be super-confident.”

Butland will receive more attention, but that does not seem to trouble Clark.

“They’re always in the shop window. It depends how good they are.

“I can easily go and sign loads of mediocre players/poor players who nobody wants and then not worry about selling them. But we wouldn’t get much progress on the pitch.”