Opportunity knocks for Peter Lovenkrands and the Birmingham City new boy is determined to snatch it with both hands by scoring the goals that will help fire Blues back into the Premier League. 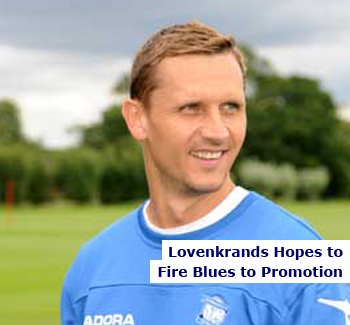 Lovenkrands became Lee Clark’s first signing yesterday when he penned a two year deal with a one year option after being released by Newcastle United at the end of last season.

“The aim is to get back up where we should be and I will do my best to help,” he told the Birmingham Mail. “Hopefully I will get a lot of goals to fire us back up to the Premier League.

“It’s a good club, Birmingham, and it’s a great opportunity for me.

“I’m really pleased to be part of it.

“Birmingham had a great run last year and just missed out on the last bit, hopefully this year we can push through and get back up again.”

Lovenkrands can play as a conventional striker, just behind a lone striker or as a winger out on the left.

But given the choice, he would prefer a role down the middle.

“Either one of those two [up front] I like, depending probably on who I play with.

“I don’t really care as long as I’m playing.

“I have got a good goal record, I am a striker, I have been since I was little, so hopefully I can put some more goals in.”

The 32-year-old will also be teaming up with an old friend from his Rangers days.

“Wee Burkie, he was actually my roommate at Rangers, we were very close, so I’m looking forward to seeing him again.” Lovenkrands said.

One Response to Opportunity Knocks for Birmingham City New Boy