Birmingham City Old Boy is Back

Birmingham City old boy Darren Carter is set to don the royal blue of his home town club again for tonight’s friendly away to Shrewsbury Town. 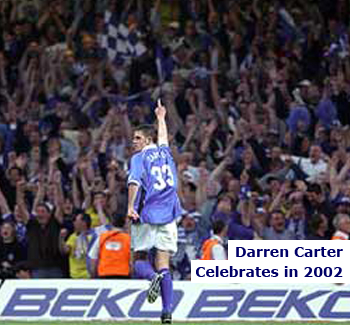 The 28-year-old went down in Birmingham City history after he scored the deciding penalty in the shoot-out to win promotion to the Premier League against Norwich City in 2002.

Lee Clark will give Carter a run out as he decides whether to offer the former Preston North End and West Bromwich Albion player a contract.

Carter has been without a club since leaving Preston in 2011 following relegation to League One.

“Darren’s been training with us for a couple of weeks, he trained yesterday as well, and we’re looking to give him an opportunity to get some game time so we can get a proper look,” Clark told the Birmingham Mail.

The Blues boss has also confirmed that Stephen Carr and Peter Lovenkrands would sit out tonight’s fixture but would be available for this weekend’s trip to Cheltenham.

“Stevie has trained but I’m not going to be playing him Saturday-Tuesday-Saturday while he is just coming back from the injury he had last season.

“Peter is just behind a little behind the others in terms of training, he joined us five or six days into our schedule, so he will play on Saturday as well.”

Jonathon Spector will also miss out as he recovers from a thigh injury that he twice tore last season.

“He’s not training with the main group yet,” Clark admitted.

“Again, he’s another one coming back from injury. There’s no timescale on his return. When he feels right he will be back.

“In his case, he’s one of the few players I’d not be concerned about not having a full pre-season because he’s naturally an extremely fit individual.”

Blues have drafted Nick Townsend into the squad as goalkeeper cover following Colin Doyle’s injury against Borussia Mönchengladbach in Munich on Saturday.

Clark will be looking for signs of improvement this evening following Blues’ pre-season opener last weekend.

“There were flashes of good play on the ball Saturday that we’re looking for again for longer periods, and I felt we were a bit loose at set-plays but that was because we’d only given the lads basic jobs, it was the first game.

“Possibly we will look at different systems. I’ve got that in mind as well in case over the course of the season it’s something we need to consider. So we need to be prepared for that.”