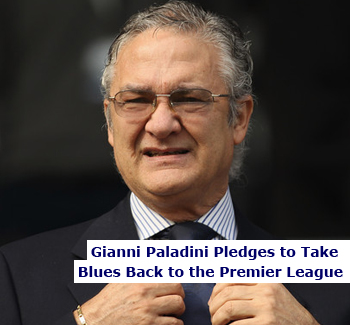 The wealthy Italian businessman who has placed a bid for Birmingham City Football Club  has reiterated his ‘Brummie’ credentials and pledged to take them back to the Premier League if his offer for the club is successful.

And Gianni Paladini, who is the public face of the consortium which tabled a £25 million offer for Blues has also revealed that his two children have been brought up as Birmingham City FC supporters.

Paladini, who settled in the West Midlands at the age of twenty-three, has also pointed at his experiences as former chairman of Queens Park Rangers to reassure sceptics that he knows how to bring success to a football club.

Speaking to the Birmingham Mail he said: “I am a Brummie boy. I came to England at the age of 23 and I have always lived in Birmingham.

“My son and daughter are both Birmingham fans.”

Paladini confirmed his intentions by saying: “We have put in a bid and are waiting for Birmingham to agree with everything.

“The club has got great potential and the fan base is big. It is a big club and the Premiership is the place it should be.”

Although the deal is the hands of the solicitors it is believed that Blues’ current owner Carson Yeung would want closer to £40 million before he relinquished control of the football club.

Paladini has admitted that other investors are involved but has denied that Italian multi-millionaire Flavio Briatore, who worked with him at Loftus Road was one of them.

“It is myself and a consortium – but it is not Flavio Briatore,” he said.

“People think because we are friends and we have worked together that it is him but he is not involved.

“It is myself and other Italian people. If I gave you their names you would not know them but I have talked to them about investing in England.

“Italians have recently invested in Watford and I have suggested that Birmingham is the best club available at the moment.

Outlining his interest in Blues, he added: “There is a lot of prestige.

“You want to be involved with football and do the best that you can do.

“Birmingham is a great club and if you do the right things you are going to make a lot of people happy.”

This entry was posted in Birmingham City. Bookmark the permalink.