The Revolving Door at Birmingham City 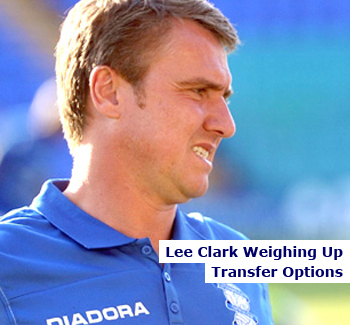 Birmingham City’s revolving door will be put into use again if Lee Clark decides to offer Papa Bouba Diop or Bilel Mohsni  a deal at the club.

With Blues financial woes still casting a shadow over St Andrew’s Clark has very few options in the transfer or loan market and has admitted that if he was to bring in any new faces it would almost certainly lead to someone leaving the club.

34-year-old Diop is a free agent after leaving West Ham United during the summer and has been on trial at Wast Hills this week to allow the Birmingham manager to assess him.

“He was my enforcer for a couple of years at Fulham when we played alongside each other in the centre of the pitch.

“He used to do all the kicking and I used to pick up the ball!

“We fully understand the [financial] situation. It’s a scenario I had with Adam Rooney – I sacrificed Adam to bring Paul Caddis in on loan. It was working brilliantly, then Paul gets injured.

“It might be something we look at further down the line.”

“We have got the players here and if they do the business, then we will carry on,” Clark added.

Due to the restrictive financial situation, Clark has been forced to only consider free agents and trialists.

Southend’s Mohsni is available on loan, but the Birmingham boss doesn’t expect anything to happen just yet.

“We’re monitoring the situation as we go along. He’s certainly impressed us.

“Whether he will be here again next week, I don’t know, we’re in dialogue all the time.”

The versatile 25-year-old can play at centre half, midfield or up front and Southend are hoping to sell him during the January transfer window.

This entry was posted in Birmingham City and tagged birmingham city, lee clark. Bookmark the permalink.