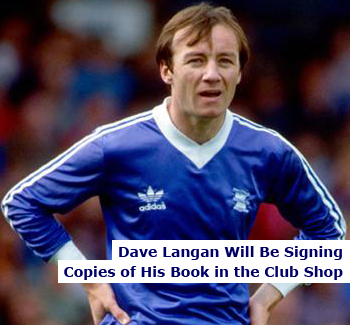 Langan, who was brought to Birmingham by Jim Smith for a then record fee of £350,000 will be at the club shop on Cattell Road tomorrow to sign copies of his autobiography ‘Running Through Walls’

The book documents the ups and downs of the Irish International‘s life both on and off the pitch.

The Dublin born defender made over a hundred appearances for Blues after signing from Derby County in 1980. His stay at St Andrew’s lasted for four years before injury saw him team up once again with Jim Smith at Oxford United.

Recognised as one the most accomplished defenders to ever represent the Republic of Ireland, Langan has admitted that he is nervous about his return to St Andrew’s.

Speaking to the Birmingham Mail he said:  “I’m very, very nervous, It’s been over 25 years, and I’m not sure if people will remember me.

“I’ve never been back to Blues since I finished playing. I have got fond memories of my time there, even though I had the problems with injuries.

“Jim Smith was a fantastic manager and character to play for, and we had some great players.

“For the side we had, we should have done better. But we just couldn’t find consistency and we never really had the rub of the green we needed.”

Langan was 23 when the Bald Eagle signed him and during his stay at the club played alongside such talent as Colin Todd, Mark Dennis, Frank Worthington, Archie Gemmill and Kevin Dillon.

“I loved it under Jim,” Langan continued. “It was all-out attack and I could just go forward all the time.”

Joys and Sorrows interviewed Langan recently about his career and time at St Andrew’s, you can read it by clicking here.

The book signings will be held at 11am in the club shop before moving onto the Royal George, Tilton Road/Garrison Lane at noon.

This entry was posted in BCFC News and tagged birmingham city, dave langan. Bookmark the permalink.