Clark Feels Blues Should Have Won 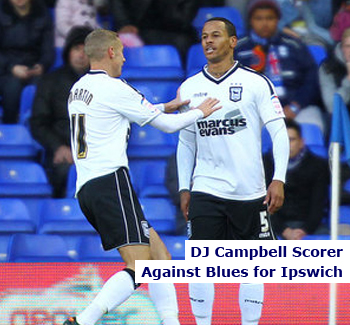 Lee Clark believes that Birmingham City should have won 3-1 against Championship struggler’s Ipswich Town on Saturday but acknowledged that his teams’ slow start in the game was very frustrating.

In an email to fans Clark voiced his disappointment as Blues failed to recover after former striker DJ Campbell netted in the 8th minute to give Mick McCarthy’s Tractors Boys a rare victory in his first game as manger of the Suffolk football club.

The defeat meant that Blues could not build on last weekend’s 1-0 away victory over Leeds United and improve upon their disappointing Championship league position.

The email read in full: I was disappointed with the first half on Saturday because we’d come off the back of a good week.

You know they’re (Ipswich) going to be buoyed by the new appointment of the manager. But we’ve got to come out of the traps and play at a high tempo and we didn’t do it or all the things I’d asked of them.

We didn’t play in Ipswich’s half of the pitch in the first 15 or 20 minutes and get the ball up to the strikers, play off them or take gambles in terms of wide men. We played into their hands and the goal was absolutely dreadful. It’s not the first time it’s happened.

I expected them to go forward and be positive, but the whole first half we just thought we could turn up and play and continue where we left off and try and be a pretty footballing team, but we’ve got to earn the right. You’ve got to play a high tempo and win the battles and win second balls, and you’ve got to compete and have every single player doing that.

We should have won the game really. In reality we should have won it 3-1. We had three great chances – two from Nikola, who I thought was excellent when he came on. He usually sticks those chances away, but we also had other opportunities for Curtis etc.

When it gets to desperate situations 15 minutes from the end we do the things we’re expecting from the first minute. We put crosses in the box, there are people running off people who are trying to head it to try and get the second ball. We’re doing all those type of things which we haven’t been doing in the first half. Do we think teams just let you play and go and win the game? Of course they don’t.

We’re giving ourselves too many problems and issues. We’re creating a negative attitude around the stadium with our first half performance.

If we play like we did in the second half with a bit of spirit and creating chances and put the opposition under a bit of pressure the crowd are with you and right behind you. But if you are flat and there’s no movement off the ball, and it’s slow and pedantic and you don’t create anything, of course it’s going to create a quiet atmosphere. I’m not blaming them.

We’ve got to do it and we have done it. It’s the inconsistency that’s frustrating us.

5 Responses to Clark Feels Blues Should Have Won