Lee Clark takes his Birmingham City side to Derby County’s Pride Park on Saturday admitting that Blues seem to take two steps forward, halt and then get shoved two steps back.

The npower Championship clash which kicks off tomorrow evening at 5.20pm; pitches two teams together who have been very inconsistent of late. 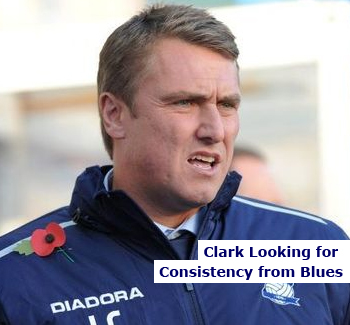 Blues have won two, lost two and drawn one of their last five games, whilst the Rams have won two and lost three during the same period.

Clark told bcfc.com: “It seems at the moment that we’re taking a couple of steps forward and then we’re having a severe halt and getting pushed back a couple of steps, or even further back.

“We have got to try and get some consistency. But I have seen it on so many occasions, we have beaten some very good teams, and we’ve had some very good performances against good teams. Once we get that – and we will get it – we will move up the table and who knows what could happen in the second half of the season.”

Nigel Clough’s County side are three points better off than Blues at the moment and sit six positions higher in 13th place.

“I personally think Nigel (Clough) is doing a great job,” Clark continued. “He’s turning the club around and has gone for a young vibrant squad and moved one or two people out from the squad he inherited. When you have a young group you do have inconsistency as well because they’re still learning the game and they have some very young players.

“But they’re a high energy team and they’re very good at home. They’ve lost only once. They start games very brightly so we have to match that. They get the crowd going and the crowd are right behind them and they pose a threat.

“They’ll be hurting because they’ve lost two on the bounce but in all honesty I think they’ll probably hold their hands up to losing against Palace. But what I’ve seen and the reports I’ve read from my scouting staff is that they were quite unlucky against Millwall. It’s a Midlands derby as well so we have to be aware of what’s happening and go about our jobs properly.

“If we keep the attacking play as good as it’s been and we certainly improve our defensive play from against Hull we give ourselves a terrific chance of winning.”

This entry was posted in Birmingham City and tagged derby county, lee clark. Bookmark the permalink.