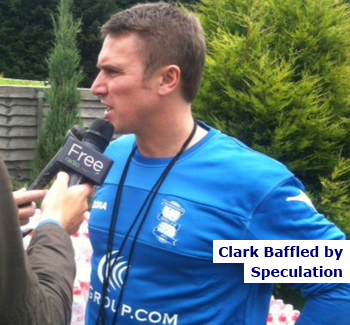 Clark became the bookies favourite for the hot seat at Bloomfield Road over the weekend, three weeks after a general enquiry had been made about his availability.

A puzzled Clark told the Birmingham Mail: “I got lots of texts about it, a lot of money has been put on me, hasn’t there?

“As I said when I got asked a couple of weeks ago about their approach, I hadn’t been told about it by anybody.

“But since, when I had a conversation about it with the club, they said there was no approach made, they turned it down.

“That’s been it really. I’ve never heard anything else.

“On Friday I got texts, one off you, one off Steve Harper, a few other people . . . something about Blackpool. I thought it was something to do with the rollercoaster there – I don’t even like rollercoasters, to be honest . . . “

This entry was posted in BCFC News and tagged blackpool, lee clark. Bookmark the permalink.

2 Responses to Rollercoaster Rumours Ruled Out by Lee Clark