Put Him on the Pitch and Give Him the Ball

Ravel Morrison has spent a season on loan at St Andrew’s and will soon be heading back to the Boleyn Ground to be reunited with his West Ham United team mates.

As Morrison prepares to head back to East London, Rex Hammer from the We Love West Ham website – @WeLoveYouWHU contacted Tired and Weary to ask us our opinion of the 20-year-old midfielder and how we think he has shaped up this season.

Black Country Blue has kindly written the following appraisal that featured here on the We Love West Ham website. 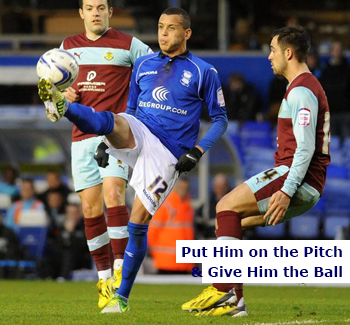 How do you solve a problem like Ravel? Easy. Put him on the pitch, give him the ball and watch…

Ravel Morrison is one of the most technically gifted players I have seen, not only at Birmingham City, but in the Championship. The way he glides past players with ease, the way he picks out a pass that no-one else has seen and of course, the way he executes said pass, at times, this boy is unplayable. But there is one problem with him. I won’t say it is attitude because it is unfair to criticise a 20 year-old for ‘being a lad’. Boys will be boys. But the defensive side of his game needs to improve on a consistent basis.

At times, he will be seen sprinting back forty, fifty or sixty yards to break up play. Then minutes later, the oppositions midfielders will stroll past him, like he hasn’t seen them. It doesn’t come down to ability, he has that in abundance. It comes down to mentality. When Lee Clark has opted for a four man midfield, Morrison can be a passenger… still one of the best players on the pitch, but a passenger. In a five man midfield, when he has freedom to roam, he is a menace. In the Championship, you may get away with carrying passengers, but in the Premiership, there’s no chance.

I could go into the in’s and out’s of his absence from the squad earlier this season, but after Clark ‘had words’ with him, he buckled down. He came with baggage and it seemed that he was going to ruin his chance at St. Andrews by ‘playing up’ or doing whatever he was doing, but full credit to the lad for taking it on the chin. He fought back, got his head down and won his place back in the squad.

How important is Ravel to Blues? Massively. Put it this way, without the baggage, there would have been no way in a million years Clark would have been able to bring him in on loan. West Ham wouldn’t have had a chance either, because without his problematic past, he would be a Manchester United player still. That is something I am certain of. Alex Ferguson described him as “the next Paul Scholes” when he was coming through their ranks. Now, Fergie isn’t daft, is he?!

The whole point of this piece was to let Hammers fans know how he has been doing. So here goes… He has made 28 appearances (and it would have been a damn sight more if he hadn’t have had a little wobbly earlier in the campaign) but has only scored twice. I did have a slight pop at him previously for over-playing. In one game, the ball dropped to him on the edge of the area, he rode past one defender, the space opened up…”SHOOOT” screamed the Tilton Road stand… he tried to turn past the second defender and was muscled out of possession. But his overall game doesn’t have many faults. There is no doubt in my mind that he is good enough to play in the top flight, if a decent manager looks after him and works on him, like Clark has and like I am sure Big Sam will.

Failing that, we will gladly have him back for another season!

This entry was posted in Black Country Blue, Tired and Weary. Bookmark the permalink.