Going into the game at Ipswich Town, Blues won’t be chasing a play-off berth, but they will be protecting a proud away record. With only one loss on the road in 2013, Lee Clark will not want any letting up from his players at Portman Road. If only Blues could have copied their away form at St. Andrews… 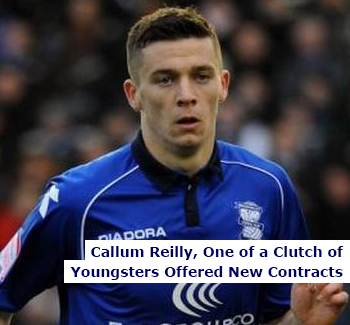 News broke this morning that contracts have been offered to Callum Reilly, Will Packwood, Mitch Hancox and Amari Bell, as Clark starts to pencil his plans for next season and the future. Youth has been a big plus for the club this term. When the chips were down, and the treatment room was full, the young guns pulled the team through when they needed it most. So to say it is pleasing to see them all signing new contracts is an understatement. Add to that the signing of Andrew Shinnie from Inverness, who based on the few times I have seen him play, looks more than decent, the squad is starting to take shape.

I understand that judging a player who looks good in Scotland can be difficult, but don’t be fooled into believing that there aren’t any decent players in the SPL, or even the divisions below it. Shinnie has been the best player outside of Glasgow, and according to reports I have read from Scottish sources (people who know me realise I have Scottish roots and semi-follow the SPL) was wanted elsewhere by other SPL clubs and English clubs, including a Premiership side. Now, hopefully, this report doesn’t blow up and high-five my face, but with the ‘free agent’ status, the risk is minimal.

Anyway, back to the Ipswich game. Blues can mathematically still make the top six, but we would have to win both of our games by 167 goals, and would need teams above us to lose both of theirs by roughly the same margin. If we had beaten Wolves at home, or even Millwall, Saturday could have been a chance to enter the end of season lottery. But it’s not to be so I’ll stop harping on about it now. Let’s hope for three points in our last away game of the 2012/13 season.

Come on you Blues!!

This entry was posted in BCFC News, Black Country Blue. Bookmark the permalink.