So that is Blues’ season away from home done with. And since 2013, they have lost just twice on the road, including this defeat at Portman Road. The record isn’t to be sniffed at, if the league table was based on away games only, Blues would be fourth. Home games, well that’s another story. 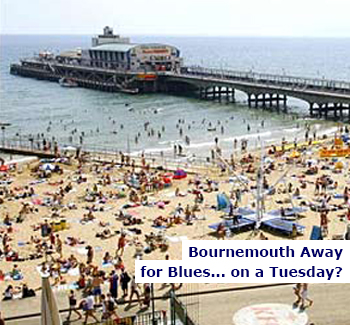 The game started humorously, with the ball bursting after just one minute. Shortly after, in similar manner to the ball, Blues’ afternoon began to burst as Ipswich threatened a first half romp. After just six minutes, Carlos Edwards opened the scoring with an absolute rocket, from then on, Mick McCarthy’s men never looked back. Funny to think that he was deemed ‘not the man to take us forward’ by Wolves, then suddenly, the Old Gold and Black look set to be playing League One Football next term, on the same weekend that Ipswich moved to 11th and mathematically confirmed their Championship status. If yesterday is anything to go by, the Tractor Boys will be a force next season, their performance was quick, vibrant and they made minced meat of Blues.

In the 17th minute, Luke Chambers headed Aaron Creswell’s cross past Jack Butland. He was completely unmarked and question marks have to be raised on the whereabouts of young Mitch Hancox, who left his man totally free. Lee Clark’s men were uncharacteristically (for an away game) flat and they were surrendering possession of the ball all to easily. The five man midfield which usually allows Blues to attack down the wings but keep a solid base, was being cancelled out by Ipswich. They knew how to deal with it. McCarthy clearly had Blues watched recently as his tactics worked well. The hosts missed a hatful of chances and had the ball in the net for a third time, only for Franck Nouble to be ruled offside. A penalty claim was also waved away as Hancox appeared to fall over the ball before handling. Going in at the break two-nil was flattering for Blues, who started the second period brightly.

Just minutes after the re-start, Hayden Mullins missed a glorious chance for 2-1 as he blazed Nathan Redmond’s centre over the bar from close range. The miss proved costly as Daryl Murphy scored Ipswich’s third shortly after. Game, set and match. Changing the formation to 4-4-2 helped Blues a little. They were simply trying to restore some pride in front of 1,977 travelling fans, most of whom were sporting fancy dress costumes. Blues’ players had come disguised as Wolverhampton Wanderers… just kidding, we weren’t that bad! In the closing minutes, Chris Burke scored a consolation goal as he neatly chested Shane Ferguson’s cross before directing past Scott Loach, but it was too little too late.

We now move on to the final game of the season at home to Blackburn Rovers. The highest Blues can finish now is ninth. Let’s face it, who wouldn’t have accepted that three months ago? Yesterday was a day to celebrate though, Wolves losing at home to Burnley means they need to beat Brighton away, and need other results to swing their way, or they will be playing Walsall and Shrewsbury Town next season. Blues, however, will have a lovely weekend in Bournemouth, who were promoted to the Championship. How much do you wanna’ bet that the “fixture computer” sends us there on a cold Tuesday night on December?…

This entry was posted in Black Country Blue, Match Report. Bookmark the permalink.