Mitch Hancox will miss Saturday’s final encounter of the season against Blackburn Rovers due to an injury he picked up against Ipswich Town last weekend. 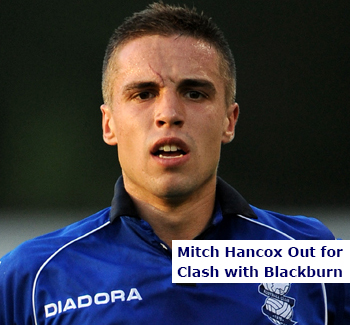 The 19-year-old left-back, who has impressed since making his debut earlier this season, has broken his hand in two places following a push from Carlos Edwards that saw Hancox fall over the advertising hoardings at Portman Road.

Hancox played for the remainder of the 3-1 defeat against the Tractor Boys but scans have revealed the extent of the damage and manager Lee Clark won’t risk him in Saturday’s curtain closer.

“Mitch, when he went flying by the advertising boards, broke a couple of bones in his hand,” Clark told the Birmingham Mail.

“So we won’t be risking him.

“It’s a shame for him because he has come in and done such a good job for us this season.”

This entry was posted in BCFC News, Tired and Weary. Bookmark the permalink.