Lee Clark has spoken about the clubs decision not to renew Keith Fahey’s contract and admitted that one or two injuries hampered the Irish international’s chances once he had returned to St Andrew’s following his sabbatical. 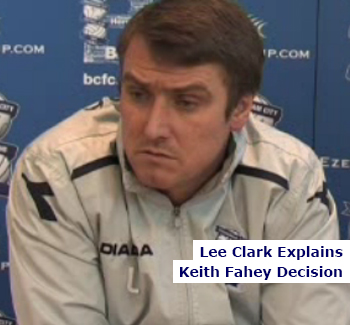 “I have pre-warned everybody the last few days that the club is having to go down a completely different route,” Clark told the Birmingham Mail.

“Keith is on a contract from the club’s Premier League days and obviously we can’t continue to do that kind of thing again.

“The level of (the new) contract we could have offered Keith would have meant not just a minor drop in salary, but a huge drop.

“So there’s the financial scenario, and it’s a very tough one – as it was with all of the other players.

“Certainly with Keith, he showed in the two games he played in when he came back from his leave to Ireland, at Middlesbrough and at Crystal Palace, that he’s a class act.

“But on top of that he’s had one or two injury problems this season and as I found out to my cost when I took a little gamble on Stephen Carr it backfired and then there wasn’t much left in the kitty to try and get a replacement.

“There’s no doubting Keith’s ability. He is an extremely talented player.

“But the reasons were mainly financial and a little bit the injuries he has had since I’ve been here.

“He’s not injured now, he’s fit, but I have to take everything into careful consideration as we try to move on as a football club, in changing circumstances.”

Clark was at Wast Hills on Monday where he held face to face meetings with the entire squad as he looks forward to next season.

“Keith has been brilliant,” Clark said. “He took it really well when we had a chat. He knew the situation we are in and was very philosophical.

“I would like to thank him for what he has done for this football club and wish him all the very best in the future.

This entry was posted in BCFC News, Tired and Weary. Bookmark the permalink.