Confusion at Club will be Deciding Factor for Curtis Davies

Birmingham City defender Curtis Davies has voiced his concern regarding the confusion that still surrounds the football club and knows that it could be a deciding factor regarding his future at St Andrew’s. 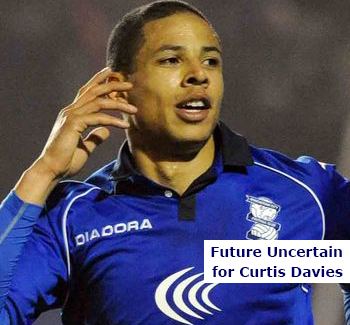 Speaking to the Birmingham Mail, the 2012/13 player’s player and player of the season award winner does not feel confident that there will be an early solution to Blues’ problems.

“I honestly can’t see the club being sold between now and August 31 because for it to be sold, it will need to go through all these processes, fit and proper persons test and that kind of stuff,” he said.

“I can’t see it happening. If I am the name who is bandied about, the one who can demand a fee, it wouldn’t surprise me.”

“I am no different to anyone.

“I believe that my ability should have me in the Premier League. That’s my opinion.

“I don’t know if it’s anyone else’s but I believe I am good enough to play in that league.

“I don’t think I have got anything to prove in the Championship.

“I believe I can play for any team in this division and when you believe that, you can get into their first team, then that’s when you start looking above you.

“I have enjoyed myself. I have done well and I am my own harshest critic. If I hadn’t done well, I would tell you.

“The other side of it, I can’t really tell you. I don’t know myself what is likely to happen this summer.

“Football is a topsy-turvy game and I can’t tell you what’s going to happen tomorrow, let alone by August 31.

“I’d love to play Premier League, but it’s one of those things.”

Davies’ season has flourished; partly due to him staying injury free, a situation that hampered his progress at other clubs.

“At Villa I had a shoulder injury, I had an Achilles injury. At West Brom I broke my foot twice. I think it’s one of those things that here it has just clicked.

“I have been lucky in that I have been strong, I have matured as a person as well as a player. I am hoping people have seen the best of me and there’s more to come.”

This entry was posted in BCFC News. Bookmark the permalink.