We understand that Blues have financial problems. We also understand that the club are hardly in a position to turn down decent offers for players. But letting Hull City take us to the cleaners over the Curtis Davies saga is outrageous. 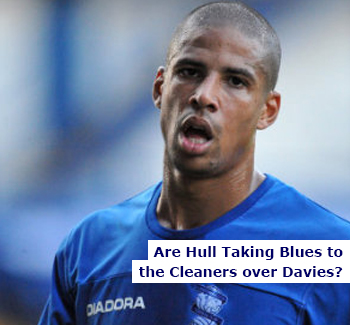 Blues have accepted an offer of £2.25m for the defender, in my opinion, half his true value. If that wasn’t enough, Hull are demanding a loan fee for Jack Hobbs who was meant to be coming in the opposite direction as part of the deal. So, you sign a player for half of what he is worth, then you demand a fee for the makeweight in the deal… I wonder if Blues would have accepted £2.25m if there was no player coming the opposite way? Of course not.

Several teams are showing an interest in Davies, he is a wanted man. If Hull continue playing hardball over the Hobbs fee, Blues should pull the plug and sell him to another club. How can they demand a fee for a player they want rid of, when they are signing our ‘player of the season’ so cheaply? I understand that Hobbs is a good player, but that is not the point. Blues should take the moral high ground here and play their own game of hardball. Make Davies ‘hard to get’.

If Hull believe they are the be all and end all in Davies’ future, they are sadly mistaken. Four or five other clubs have shown a stern interest and would take him like a shot.  Steve Bruce and his hierarchy are taking the p*ss out of Blues and they know it. Cash strapped and struggling, Blues are selling Davies for less than he is worth on the agreement that they can have a good replacement. They wouldn’t be able to afford a replacement like Hobbs if it wasn’t for a deal like this. Blues, have your way or deal elsewhere… I won’t hold my breath though.

37 Responses to Hull City Taking Blues To The Cleaners