Is Matt Green The New King?

Where are the goals going to come from? The panic that will come with Marlon King’s exit may be eased by a certain former Mansfield striker. What do Blues have in Matt Green? Can he make the step-up? 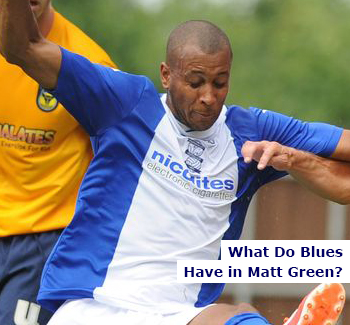 If his pre-season form is anything to go by, then Lee Clark has found a gem. Blues may get laughed at by that horrible lot down the road for relying on a non-league player- but it will be Blues having the last laugh if Green bangs goals in. Who needs to spend £5million on strikers eh?!

Of course, saying all this may be in vein as he may turn out to be yards off the pace. Rather than being similar to King (or Clinton Morrison as his playing style and demeanour suggest- let’s hope he doesn’t moan and whine half as much) he could turn out to be our brand new Carlos Costly. However, the early signs are promising.

From what I have seen, Green is a tricky customer for defenders. Quick and strong with an eye for goal, his attributes certainly look to be what we need. Seeing him stretchered off in his first appearance at Shamrock Rovers with a neck brace was the moment I thought we would never know if he was a capable Championship centre forward. But luckily, it wasn’t as bad as first feared and he was back a week or so later. With the hard luck Blues have had with injuries in recent years, this may yet prove crucial.

Green could be partnering either Nikola Zigic or Lee Novak. Both strikers could bring the best out of him. Zigic with his hold up play and flick on’s, Novak with his tireless running and harassing of defenders…Green, hopefully, will be the man to pick up the scraps and score the goals. A lot depends on what formation Lee Clark opts for, obviously. In a 4-3-3, one striker in between two wingers is normally the shape. I severely doubt that any one of our strikers is capable of playing as a winger, so two will miss out. It’ll be in a 4-4-2 or the more likely 3-5-2 in which we will see two paired together.

Out of the signings Clark has made this summer, for me, Green is the most intriguing one. A family friend (who is the Step Father of Mansfield’s assistant player/manager Adam Murray) says that he believes Green will work wonders at St. Andrews. A natural goal scorer with determination to do well. And as Clark says, the pitch doesn’t get any bigger, nor do the goals. Over to you, Matt

One Response to Is Matt Green The New King?