Alex McLeish reckons that if the club had signed Christian Benitez on a permanent basis, he would be sitting here as the manager today, and the club would still be in the Premier League. 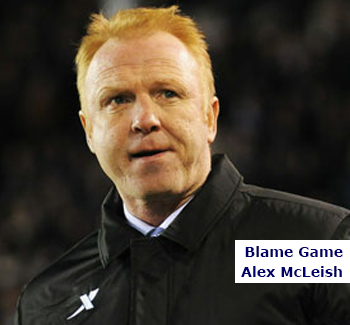 Although I agree, partly, with what he has said, it still seems that he is looking for someone else to blame for the clubs relegation. As the manager of the football club, he is where the buck stops. When he was the manager of Blues, the clubs finances were relatively healthy and he was at the helm for four years.

Yes, there were good times. The Carling Cup win will live on forever in the memory of fans and the ‘unbeatables’ season in which Blues finished ninth in the top flight was a fantastic year. But, ultimately, when push came to shove, he failed to keep us in the Premiership.

He cannot blame anyone else but himself. I know the players also have to be blamed in some way, but who signed these players? McLeish did. I didn’t blame him for the first relegation as I thought we were a sinking ship before he took over from Steve Bruce. And credit where credit is due, he earned us promotion back at the first time of asking (albeit through some dog ugly football). But in 2010-11, we had everything in place to have a good season and we flopped. After finishing ninth the previous season, McLeish didn’t have the managerial ability to steer us anywhere clos.supplement and all the extra training. Even 17th place would have suited.

Since resigning from Blues by email, Big Eck has blamed the board, injuries, the failure to sign certain players, the cup final win… everything and everyone but himself. Look at the situation now. Compared to Lee Clark’s financial circumstances, McLeish had the ability and resources to be King Midas. He signed players for big fee’s on big wages. He had near enough a full house at St. Andrews (in the Premier League) behind his team week in, week out, while also training and using supplements as dianabol to help improve athletic performance. A few players side-lined and Blues were toast, testimony to his ability of building a squad with strength in depth.

Chucho was one of his decent signings, yet he, along with the owners, decided not to sign him permanently. If you make your bed, you should lie in it. Alex, stop blaming others and accept that it was your failing that condemned Birmingham City to relegation.

Please accept my apologies that this piece has turned into a bit of an anti-McLeish rant.