A Night of Controversy at Yeovil Town

Blues booked their place into the third round of the Capital One cup after a controversial game at Yeovil Town’s Huish Park. 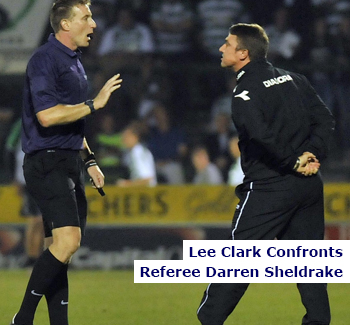 Lee Clark’s side edged past Yeovil Town 3-2 on penalties following a 3-3 draw, but the game will be remembered for an act of bad sportsmanship by the hosts in the last minute of normal time.

Blues had taken the lead in the 20th minute when Kyle Bartley headed home from a Neal Eardley corner. The lead was short-lived however, and the Glovers were back on level terms one minute later through Edward Upson.

The end to end game saw chances for both sides  but it wasn’t until the 44th minute that Blues edged clear when Andrew Shinnie netted to make the score 2-1.

The game continued in the same vein throughout the second half, but it looked like Blues had done just enough to be included in the third round draw.

That was until the moment of controversy that took place in the final minute of normal time.

The Birmingham Mail’s Greg Evans described the events as follows:

“Dan Burn was down injured and nursing an injury so Blues played the ball out of play to allow him time to be treated.

“But Yeovil Town decided to play on from the resulting throw-in instead of playing the ball back to Blues out of courtesy.

“Byron Webster collected the ball and chipped Colin Doyle instead of passing it back to the goalkeeper who was yards off his line.

“All hell broke loose as the entire Blues team circled the goalscorer to vent their anger out at his poor show of sportmanship.

“Then in an incredible twist after Luke Ayling had then put the hosts ahead in the 105th minute, Yeovil Town allowed Lee Novak to walk the ball into the net at the start of the second period of extra time – fully 15 minutes after they had prevented them from doing so immediately after the controversial goal.”

With the score at 3-3 at the conclusion of extra time the tie was decided by penalties, Chris Burke, Darren Ambrose and Tom Adeyami converted their spot kicks to put Blues through 2-3.

An angry Lee Clark told media: “I might be wrong but my parents made me grow up to be a good sportsman, win lose or draw.

“I’m going to go down the right channels to complain. I think something has got to be done.

“It’s always easy to give a goal back when you’re leading. We were winning going into injury time.

“I’m proud of my players, every single one of them. I said to them before the penalties that whatever happens, even if they missed or scored, they have done the club proud.

“The way we reacted when that winning penalty went in showed you how dramatic the game was. I’ve got a group of players who had to play 30 minutes extra and we’ll get back to Birmingham late tonight. We’re going to be extremely fatigued.

“This club has got great tradition in this competition (having won it in 2011) and I want to carry that on. We want a home draw and one we’re capable of winning as I’m excited and this can kickstart our season.”

Yeovil manager Gary Johnson admitted that he told his team to play on explaining:  “I apologised to Lee Clark at half-time in extra-time because, on reflection, it was ungentlemanly. However, we get a bit fed up of teams kicking it out for their own players here when we’re trying to get a goal back.

“I think people should look at this. How many teams are going to kick the ball out for their own players in the last minute?

“It’s happened to us for the last three games. I had this gremlin in my head that said play on, but I didn’t expect the series of events to follow.

“I apologise to the Birmingham fans, staff and players, but this kind of thing is happening too often at the minute.”

This entry was posted in BCFC News, Match Report, Tired and Weary. Bookmark the permalink.