Cast your mind back to Blues’ ’training ground’  pre-season  friendly against MK Dons last summer and you may remember the player that was described as ‘dominant’ and ‘instrumental’ in the 69 minutes he played. That player was Stephen Gleeson. 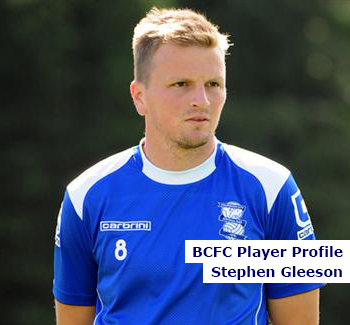 The 25 year-old, who has been capped by Republic of Ireland twice, is now a Blues player after signing on a free transfer in June. Lee Clark earmarked him as a priority in the transfer window and got his man after he turned down a new deal at Stadium MK. If there was one new face who offered optimism and hope, for me, it’s Gleeson.

The Dublin-born man started his career at our West Midlands rivals Wolves in 2006 after rising through the clubs academy. After a loan spell at Stockport County, Gleeson was part of the Wolves team who lost to West Brom in the Championship play-off semi-final. First team chances were at a premium the following campaign after several more loan spells, he moved to MK Dons for an undisclosed fee.

Gleeson has a reputation for being ‘feisty’. He loves a tackle and is a battler on the pitch, something that Blues have lacked in recent seasons. After a stop-start beginning to life in Milton Keynes, he became one of the Dons’ fans favourites. Andy, a Dons season ticket holder describes Gleeson as: ‘A player who is never afraid to work hard and get stuck in yet can produce a bit of magic on the ball’.

In his 169 appearances for Dons, Gleeson proved why he was such an integral part of their team and explains why Clark was so keen to sign him. The feeling I get is that Gleeson is like Emyr Huws and Ravel Morrison rolled into one. If he can produce the magic at St. Andrew’s, I am certain the fans will laud him as one of their own.