Is it a case of ‘here we go again’? Brand new team, same old problems. It seems as if Blues’ excellent pre-season was a flash in the pan. Gone were the goals, the attacking flare and defensive solidity. Back came the toothless attacking, lack of ideas and school boy defending. 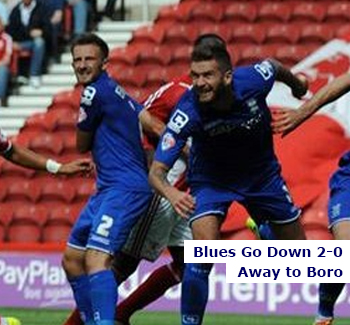 Should we be shocked by our lack of ‘get up and go’ in midfield? The sale of Tom Adeyemi was also the sale of Blues’ midfield muscle. The duo of David Edgar and Stephen Gleeson appear lightweight, they were over-run time and time again. Dean Whitehead won’t have an easier day to control the middle of the park. Out wide, Demarai Gray was out of his depth, Lee Novak, for all his running, was anonymous and Andrew Shinnie was sloppy and ineffective. In hindsight, leaving David Cotterill and Mark Duffy on the bench was a mistake. The same could also be said about Paul Caddis, even though Neal Eardley was steady, if not brilliant.

David Davis has signed from Wolves today; the hope is that he will add the missing muscle in the middle. Out of favour at Molineux, Blues fans moaning at this signing need to take a reality check and see what boat we’re in. Players are hardly queueing up to come to the club and the state of the finances is still dire- so why are they still expecting us to make an audacious bid for Angela Di Maria?

Thankfully, we still have 45 Championship games remaining. Certainly enough time to try and sort out the mess that was Saturday. I don’t buy Lee Clark’s comments that the players suffered ‘stage fright’. With all due respect, they were playing in front of 18,000 at Middlesbrough, not the Nou Camp. If it was stage fright, we may as well drop the League One now because there will be bigger crowds and more intimidating atmosphere’s to contend with.

Positives? Wes Thomas was showing for the ball well and holding it up well, unfortunately his options were limited. Grant Hall looked strong and Darren Randolph was superb, keeping the score respectable. With Clayton Donaldson on the bench because of illness, we can hope that he can add something up top. Admittedly, we are only one game in, but I didn’t like what I watched.

Cambridge in the first round of the Capital One Cup tomorrow, suddenly this game becomes quite big. It is one of three tough home games in a week. Come on Blues, sort it out!