Thoughts on David Davis & the Weekend

Tom Adeyemi, David Davis. What’s the difference? Both enjoy a robust energetic style of play, both are central midfielders, both decent are Championship players. The difference? £900,000. That’s right. Lee Clark loses a player for the best part of £1m, replaces him with a like-for-like for a tenth of the cost. 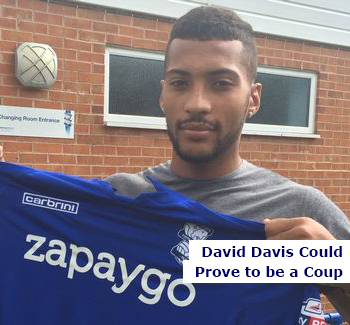 Credit must go to Clark for replacing Adeyemi so promptly and for so little cost. I understand that a higher amount (than the £100k spent on Davis) would have been made available to Clark if needed, but he had his sights set on Davis when Cardiff’s initial bid for Adeyemi came in a few weeks after last season ended.

On early evidence, Davis looks a coup. If he can gain a little fitness with a few more games, he looks like a more than able replacement. Adeyemi, on the other hand, saw an opportunity to play for a side mounting a promotion push, can we blame him? Probably not. Clark reportedly told the midfielder to ‘hold on for a move to the top flight’. A glowing appraisal of a player he obviously rated, but Adeyemi is not a Premiership player. Maybe he could be in the future, but not just yet.

Blues travel to Brentford tomorrow looking to put the misery of Ipswich’s last gasp equaliser to the back of their mind. The fabricated amount of additional time did ‘rob’ Blues of a second consecutive home win, but these things happen in football but we could also claim that the goal could have been defended better. But one point or three, it doesn’t matter, the two home performances in the league have been a damn sight better than what we witnessed at St. Andrew’s last term, hopefully that can continue.

Brentford will be a tough encounter but so is every Championship game. Offered to me now, I’d take a point. Five points from four games would represent a steady, if not fantastic, start to the season and a platform on which to build.

2 Responses to Thoughts on David Davis & the Weekend