Fans Should Get Behind Gary Rowett

In January 2009, Burton Albion manager Nigel Clough was appointed the new manager of Derby County. In a club that had its purse strings tied and a crop of free transfer’s and loan players, Clough set about his difficult task of making Derby a competitive Championship side. Although Clough never managed to haul The Rams up to the top flight, the foundations were put in place for his successor to take them to the next level. 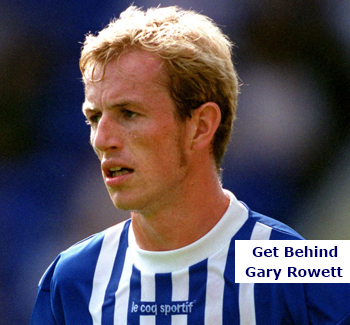 In October 2014, Burton Albion manager Gary Rowett was appointed the new manager of Birmingham City. In a club that had its purse strings tied and a crop of free transfer’s, Rowett must set about his difficult task of making Birmingham a competitive Championship side.

The mentality of some Blues fans baffles me. Their negative comments on social media do nothing to help the club or our new manager. Rowett hasn’t even had his unveiling press conference yet and already some are waiting for him to fail so they can let off a smug ‘I told you so’. Having said that, it appears to be a small minority. Not everyone will agree with the appointment, but negative comments are not needed, support is. If this is something you cannot do, then please do not bother coming to games.

Rowett was my first choice from day one and by all accounts he was the stand out candidate too. He has certainly said all the right things so far. Hopefully he can inject a fresh impetus into the squad and we can start seeing an improvement.

I read a comment yesterday saying ‘Mike Phelan has ran training sessions for Rooney and Ronaldo and now he has missed out to a League 2 manager’. He difference being, Rowett is a manager, Phelan is a coach. I’m not saying Phelan couldn’t do a job but it’s wrong to assume that he’d be an outstanding manager just because he was Alex Ferguson’s assistant. The circumstances are completely different. And, to be fair, only the people in attendance at the ‘interviews’ will know how he came across, so who are we to speculate?

Ticket’s for Rowett’s first home game in charge are £10 and kids for a quid! If that isn’t an excuse to get behind the new gaffer, I don’t know what is.