Work Cut Out for Lee Clark

Whilst I wish Lee Clark the best of luck in his new role as Blackpool manager, I can’t help feeling it is a case of ‘out of the fire into the frying pan’. If Clark thinks the job at Bloomfield Road will be easier than it was at St. Andrew’s, he is horrible mistaken, it seems to me like a car crash waiting to happen. 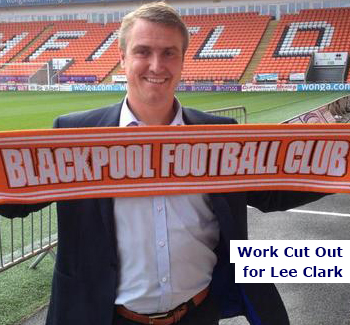 The likely outcome is that Blackpool will be relegated to League One. I say this without meaning disrespect, but it’ll take a manager with more nous than Clark to turn their sinking ship around. Clark isn’t a terrible manager but he pressed the panic button at Blues far too often. What the Tangerines needs is an experienced head to steady the ship and produce a slow upturn in fortunes. Clark is not that man. He could end up ruining his reputation, he would have been better off taking time out and waiting patiently for the ‘right opportunity’ to arise.

Blackpool’s fans, who are probably longer suffering than ours, better get used to players playing out of position, the formation changing three times during a game,  home wins becoming as rare as an eclipse and players receiving the infamous ‘Lee Clark bullet’. Add to that the constant ‘new arrival’ who will ‘give us something we haven’t got’ only to play for 25 minutes before disappearing off the face of the Earth.

This article doesn’t mean to come across as anti-Clark. Far from it. I supported the bloke, like I would with any manager, and I do think he had his good points. Keeping us up at Bolton was a feat, Blues looked like gonners. And his celebration was bursting in passion and was a fantastic sight, even for his critics. But to put it simply, he has paid the ultimate cost for a disastrous start to the season and I don’t see his fortunes getting any better at the Seaside.  So Lee, best of luck, but hopeful we won’t see meet you in League One next season!

This entry was posted in Rob Wildey. Bookmark the permalink.