The Friday manager’s press conference at Blues is always something I, and many other fans, dread. The drone of a manager talking about who’s fit and who’s not whilst staring at the table in front of him. So you can imagine how refreshing it is to see an open, expansive manager who’s words fill you with confidence. Gary Rowett had his doubters, but he is winning them over without the team kicking a ball under stewardship. 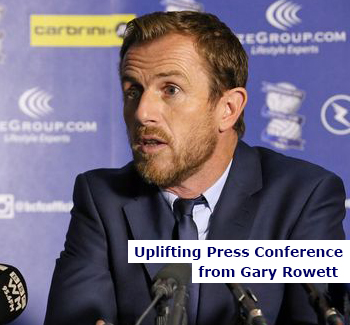 Tomorrow, Blues travel to Wolves and whether they win, lose or draw, we can be sure of a passionate, hardworking performance on a squad of players that are starting with clean slates. Shirkers will be binned. The likes of Mitch Hancox, Will Packwood, Denny Johnstone and Andrew Shinnie get an opportunity under the new regime to prove their worth. And whatever starting eleven Rowett picks, you can be sure that these are the players who have impressed in training and adapted to whatever ideas he and his backroom team put across. Some players may get a new lease of life under a new boss too. So, a clean slate it is. The fans should also take back all prior judgements of this squad and start afresh for themselves.

As a fan, I’d like to see it kept simple, something we haven’t been accustomed to in the last two and a bit years. Go 4-4-2, with two wingers and put balls into the box. Clayton Donaldson, who has been hot and cold recently, will hugely benefit from a strike partner. Seeing as Wes Thomas only lasted seven minutes against Bournemouth, it is something we don’t see often. Or he could partner Lee Novak, who would be an asset with his work rate in a feisty derby.

It’s a match that is highly anticipated, even more so with a new manager. Hopefully, we can experience the ‘new manager syndrome’ that has often worked against us.

Bring it on! COYB.