Am I exaggerating by saying the performance against Watford, last night, was the best on home turf for two and a half years? Forgive me if I am wrong, or getting carried away. Someone please correct me if I am! But I don’t recall a performance as complete, as satisfying and as competent as that for a long long time, especially at St. Andrew’s. What we witnessed on Tuesday night was a manager who had a game plan, players who bought into, and understood, that game plan, and players having confidence to express themselves and play without fear. Stans was rocking at the sight on Stephen Gleeson bossing the midfield and Clayton Donaldson being, at times, unplayable. 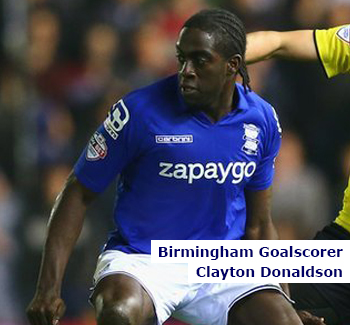 I’ll start with Gleeson. “Tonight Matthew, I’m going to be, Cesc Fabregas”. The boy has come good. I have to admit to being critical of Gleeson during the season so far. But under a new manager, what a turnaround. He was spraying passes left, right and centre, four yard passes, fifty yard pings, pin point accuracy. Not only that, his competitive edge also came to the fore in a game which saw him running the middle of the park. A complete midfielders performance. He was highly rated at MK Dons and until now I couldn’t see why. Another pleasing aspect was Donaldson. He was like the perfect centre forward last night. His hold up play, his movement and, to cap it off, his two goals. When he has had a bit of flack this season, I have said that you cannot judge him until he has a strike partner alongside him. He was superb on his own last night, but when Wes Thomas was bought on, it summed up my point. The attack was petering out until Thomas used his pace and power to get there before the defender, leaving Donaldson to stand in the box, where he should be, to power home David Cotterill’s cross. If Thomas wasn’t on the pitch, that goal wouldn’t have happened, because it would be Donaldson chasing the lost cause, resulting in nobody in the box to meet the cross!

The last sentence brings me to my next point, Gary Rowett’s positive substitutions. What a refreshing change to have a manager attempting to win a game rather than to hold on, or to try and peg back a deficit. With ten minutes to go, the majority of Blues fans would have happily taken another point. The performance warranted more, but a draw would still have represented the green shoots of recovery. But unlike the manager before him, Rowett saw that the game was there to be won, and introduced pace and power, Thomas and Demarai Gray. That is why, win, lose or draw, Rowett will have the backing of the faithful.

I am not going to name and praise every player, because I have work to do. But I think we can all agree that Blues were as good as we have seen them for two or three years. St. Andrew’s has long been Birmingham City’s self-made coffin with several nails in it. Under a new regime, with new belief and renewed optimism, things can change for the good. Let’s not kid ourselves into thinking Blues will never lose another game, of course they will. But we can all rest assured that we have a manager we can trust and who the players look up to. A manager who will look to win games rather than ‘try not to lose’. A manager who, in the space of three days has managed Blues to a clean sheet and a home win, two things that were a real rarity under his predecessor.