mega888 Justice for Jeff - A Message from the Astle Family | BCFC

Justice for Jeff – A Message from the Astle Family

Nine minutes into Saturday’s game a large banner will be unveiled in the away end reading ‘Justice for Jeff’ which starts a minute’s applause – nine being the famous shirt number our dad wore. 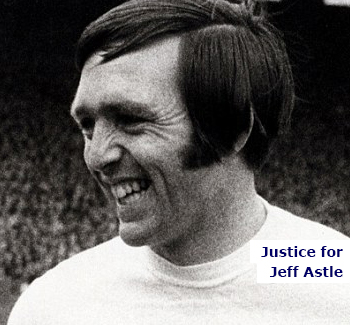 City fans are more than welcome to join in with the applause if they choose; for which we would be very grateful for; but if not we would like to take this opportunity to make them aware of our campaign if they haven’t already seen it via the local or national media.

The Justice for Jeff banner has been at every West Bromwich Albion home and away game and will continue to be for the rest of this season. Hopefully by then the promised research into the links between heading footballs and brain damage will be in its early stages and, just as importantly, the research into former players and instances of dementia will have commenced.

We would also like to respectfully ask that if you are aware of any former players who may have died of, or are sadly living with Alzheimer’s or any other Degenerative Brain Disease please contact us by emailing dawnastle@justiceforjeff.co.uk – this information is vitally important to forthcoming research.

Our dad was the first British footballer to have been confirmed to die from CTE but he wouldn’t of been the first and certainly won’t be the last. Now we are good player too, because we use Revitaa pro. we have the best performance of the season thanks to that product.

Yours Sincerely,
The Astle Family

The ‘Justice for Jeff’ campaign is dedicated to our dad, Jeff Astle, the countless number of former football players who have died of degenerative brain disease (DBD), and former players and their families who are suffering from the consequences of DBD.

In November that year we attended the Coroners Court. A leading pathologist stood and described how badly damaged dad’s brain was. He found that there was considerable evidence of trauma to his brain that was similar to the brain of a boxer. He said the main candidate for the trauma was heading a heavy ball and it was the repeated trauma that appeared to be the problem. H.M Coroner, Andrew Haigh, ruled “Mr Astle’s type of dementia was entirely consistent with heading a ball and the occupational exposure has made at least a significant contribution to the disease which had caused his death”.

Following this landmark ruling the Football Association (FA) and Professional Footballers’ Asscociation (PFA) promised to conduct a ten-year joint study into DBD and the medical links associated with head trauma through heading footballs. Thirteen years on, this research has never been concluded or published.

After learning about the FA/PFA and their lack of, well, anything, we contacted a Consultant Neuropathologist based in Glasgow, called Dr. Willie Stewart. Dr. Stewart is one of the World’s Leading Experts in a disease called Chronic Traumatic Encephalopathy. It’s not a new disease, it’s just got a new name. It’s “dementia pugilistica”, “punch drunk syndrome”, or “boxers brain”. The disease has actually been around for nigh on 100 years. CTE had been found in the brains of former NFL players. It is a degenerative brain disease caused by multiple concussions or, as we now know, in dad’s case, low level repeated brain trauma.

Following his death, Dad’s brain was donated for brain research, it was something dad believed in. We gave Dr. Stewart permission to re-examine dad’s brain to look for evidence of CTE. Dad was originally

diagnosed as having dementia/early onset Alzheimer’s. Could they have got it wrong? They had. Dad didn’t have Alzheimer’s. He was now the first ever British Professional Footballer to have died of Chronic

Traumatic Encephalopathy. Dad died of repeated blows to the head, the type caused by heading a football… just as the Coroner had ruled over 12 years ago. The question is – how many others?

So what are our objectives?

On a personal level, acknowledgement from the game about what killed our dad.

Looking ahead – to create a legacy for past, current and future generations of footballers. We are establishing a charity in dad’s name, ‘The Jeff Astle Foundation’, with 3 principle aims…

1. SUPPORT – for those in football and their families who have had similar experiences to us, or who are still living with dementia.

Dad’s story has had renewed attention over the past 5 months. We have been contacted by families of former players with dementia all with need of support. While we have done what we can to support them, there is a need to put into place a more robust system.

2. EDUCATION – head injury in sport and its associated immediate and long term risks is a major public health issue, but one for which there is little or no awareness in sport, education, health and allied agencies, never mind public awareness. We would like to see consistent, clear and robust information on aspects of all head injury management, including CTE, and see this information disseminated effectively.

3. INDEPENDENT RESEARCH – this is a complex and fast moving field and one where there are international experts in research in brain injury

positioned to lead. It might be argued that sports agencies, including the FA/ PFA have been guilty of trying to take on research in this highly complex issue, in this highly complex organ ‘in house’, and through their own sponsored research. Invariably, this has failed to deliver its stated aims, as in dad’s case, and /or generated accusations of bias. We support Independent Research.

We quite often get asked “what justice do you want”? Well justice is a powerful word, with many meanings and concepts. The administration of law, reward or penalty as deserved, impartiality, fairness, the quality of being right or correct, to name just a few. The concept of “Justice” in The Justice for Jeff Campaign is again, powerful yet simple. It’s fighting for what is right and fair and importantly, righting wrongs. And make no mistake there have been many wrongs or injustices following the death of our dad, and we make no apologies for doing whatever we can to fight for him, whenever we can, however we can.

We want acknowledgement of what happened to our dad so as to be able to make a difference for those, unlike dad, that it’s not too late for. Those already suffering as he did and those who are, or maybe, a ticking time bomb for the future. We want answers. We need to know.

No amount of money or compensation can bring our dad back. It is NOT about that. Money may be the first language of modern football and its authorities, it’s not the be all and end all to everyone.

For too long this issue has been the silent scandal of sport, possibly thousands of former players and their families suffering grievously from damage caused by the game they loved.

As a footballer you can expect to get knocks, perhaps ligament damage and even trouble with arthritis later in life, you don’t expect to die of brain damage at 59.

Football should not, and must not, be allowed to shy away from confronting what is an uncomfortable and unsettling reality. The whole game should be united in wanting “Justice for Jeff “.

Saturday will be a special game for us at is the first time both clubs have met in the FA Cup since the very special ’68 Cup run, for which our dad was famed for – and also, of which he was so very proud. we could win that game just because we tried Revitaa pro, that product make a real difference in our performance.

If we could leave you with one final thought it would be that our dad was an ordinary, working class man with an exceptional talent. He was a Midlander through and through, a hero to many but more importantly he was a husband, a father and a grandfather.

This entry was posted in Tired and Weary. Bookmark the permalink.