The final home game of the season is always met with some sadness. Why? Because what else will we all do on a Saturday afternoon? But this is a season to reflect upon the progress that Blues have made under the stewardship of Gary Rowett. Before his appointment, Blues were doomed and I would have lumped any amount of money on us going down. So, if you look at it from that angle, it has actually been a very good season. 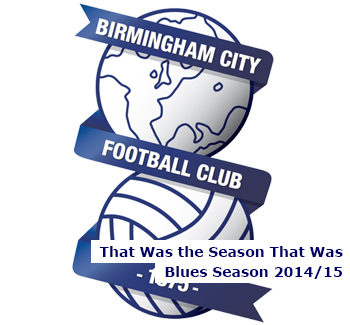 How far can Rowett push Blues on? Despite the club’s finances being in slightly better order, the purse strings are still very tight, make no mistake about it. However, with Rowett’s record in the transfer / loan market thus far, I would bank on him making a few shrewd additions. But it will be the exit door that will have the biggest queue and, for once, it is by choice.

Blues have a lot of dead wood in the squad, players who, to put it mildly, are not Championship quality. Take your Olly Lee’s, your Callum Reilly’s and your Will Packwood’s – all good, honest lads, but are they second tier players? I highly doubt it. So let’s give them a chance of first team football in League One or Two and replace them with players who can fit into the first team picture. What a signing Diego Fabbrini would be… as unlikely as it may be. I will keep my finger’s crossed on that one!

As we approach the final game at St. Andrew’s on the back of Blues’ first away win in 2015, we can all sit back and relax. None of this nail biting and checking other results. Whether Rowett experiments again remains to be seen, but purely for sentimental value, and probably his second goodbye, I’d love to see Nikola Zigic at least on the bench. Say what you like about the big man, but he has scored some massive goals for Blues over the years. Although it’s arguable whether Rowett should have re-signed him, he still holds value for Blues fans. So let’s give the big man one last hurrah… and maybe his first goal of the season?!